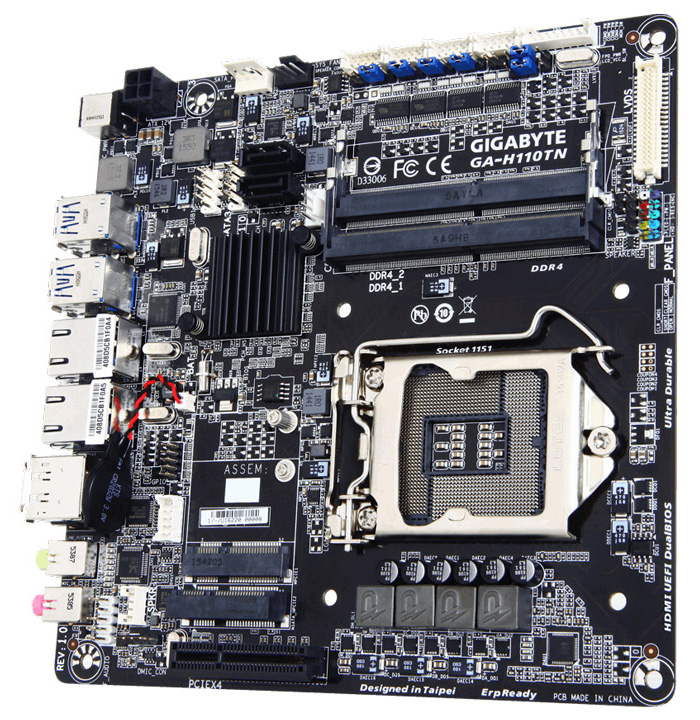 In case you own an all-in-one computer and your motherboard has died then Gigabyte may have good news for you – the Taiwanese motherboard maker has released the GA-H110TN Thin mini-ITX motherboard that is designed to work in AIO computers.

The new motherboard is obviously based on the Intel H110 chipset and works with Intel Core 6th generation processors, codenamed Skylake with a TDP level of up to 65W. The board has elements that are up to 20 mm tall and a connector for an external PSU, which further characterizes it as an AIO PC motherboard. The GA-H110TN Thin comes with two memory slots for up to 32 GB of SO-DIMM DDR4-2133 memory, two SATA 3.0 ports, a single PCI-E 3.0 x4 slot and two Mini PCI-E slots, one of which can house an mSATA drive, while the other has been designed for Wi-Fi cards.

The back panel of the GA-H110TN Thin is equipped with two Gigabit Ethernet ports, a DC-In connector, four USB 3.0 ports, DisplayPort and HDMI connectors and, of course, audio jacks. In addition the board supports up to two cooling fans and LVDS-compatible displays.

It is unclear right now when the GA-H110TN Thin by Gigabyte will be in stores and how much it will cost but you can check with your Gigabyte representative to find out more.