Kangaroo is a smartphone-sized desktop PC 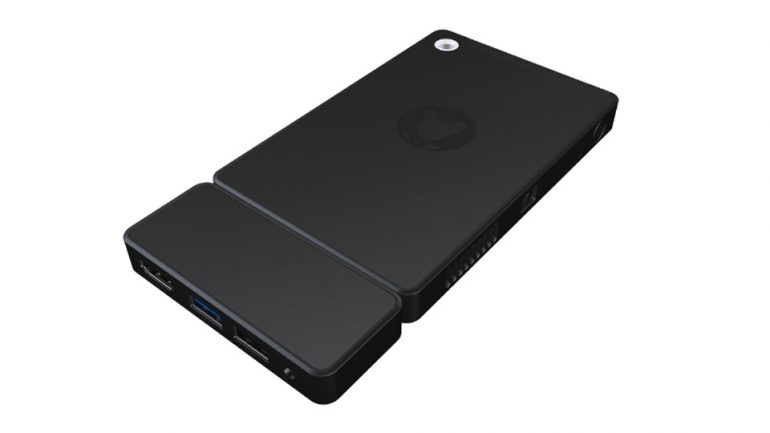 Desktop PCs are definitely not modern nowadays – PC sales have been declining for years and the end is nowhere in sight. Even Windows 10 cannot provide the sales boost PC manufacturers need much to the surprise of many people but the facts are here – sales are slowing down and Q3 2015 is not an exception.

Despite this negative trend a company called InFocus has released a new desktop PC called Kangaroo. The device is not your regular desktop PC, though – it is as large as a smartphone but provides enough power for everyday tasks and thanks to its size you can take it anywhere you want with no problems at all. The gadget is so small even notebooks cannot compete here.

The Kangaroo is said to be the world’s smallest portable desktop PC – it measures 124 mm tall, 80.5 mm wide and 12.9 mm thick. The computer weighs just 200 grams (0.44 pounds) and looks like a relatively large phablet. The device uses a removable base unit that adds a HDMI port, two USB ports and a DC power port and the base unit itself adds 46.9 mm of thickness.

But the magic of Kangaroo lies elsewhere – by using the connectivity ports the computer can be connected to any modern display and turn itself into a fully equipped PC. The small-sized PC is powered by an Intel Atom Z8500 Cherrytrail processor that runs at 2.24 GHz and that does not require a cooling fan, making for a completely noiseless device. The Kangaroo also includes 2 GB of LPDDR3 memory and 32 GB of internal eMMC memory that can be expanded by as much as 128 GB thanks to an included microSDXC memory card reader. The rest of the specs include a Wi-Fi adapter, Bluetooth 4.0 and a battery that can last for up to four hours so you can use the computer without the base unit. In addition to all this the Kangaroo comes with Windows 10 Home out of the box. Isn’t this surprising?

The best news comes last – the Kangaroo is now available online where it sells for just USD 99 and this price includes the base unit as well! Given the tech specs and the price this might be the best PC deal you will ever have!