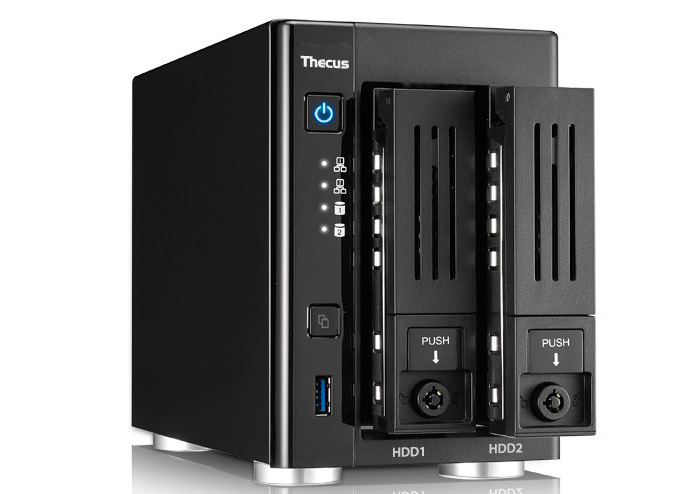 Thecus presented its N2810 NAS device back in January 2016 but despite this the company has just announced an improved version of the N2810. The new NAS device is called N2810 Plus and comes with several hardware upgrades that should ensure better performance.

The new N2810 Plus comes with a quad core Intel Celeron N3150 processor at 1.6 GHz, up from the dual-core Celeron N3050 processor, again at 1.6 GHz, found in the original N2810. In addition the N2810 Plus doubles the RAM memory inside from just 2 GB to 4 GB but if you are not happy with this you can add one more DDR3 memory stick for up to 8 GB of RAM. The rest of the specs remain the same, though, so expect to get support for up to two 3.5-inch SATA hard drives that you can connect in RAID 0, RAID 1 and JBOD arrays, 256-bit AES-NI encryption, VPN, personal cloud computing with the Thecus T-OnTheGo software, 4K video playback, two Gigabit Ethernet ports, a metallic chassis and USB 3.0 ports for high data transmission rates.

The new Thecus N2810 Plus runs ThecusOS 7.0, which also comes with various improvements and “significant advancements in productivity, flexibility, and performance”. The new NAS device will ship on April 19 this year. No word on pricing.