The MK2060GSC has been designed to target telematics and infotainment applications where proven performance and capacity are critical, and represents a significant innovation in HDD technology for automotive applications. Technical benefits include approximately 78 per-cent improvement in internal transfer rates, compared to the previous series, a faster seek time of 12 milliseconds and extremely quiet ‘silent seek’ operation of 23dB. These features make it ideal for multimedia and navigation applications, which require a combination of high storage capacities and rapid data read operation to secure user satisfaction. 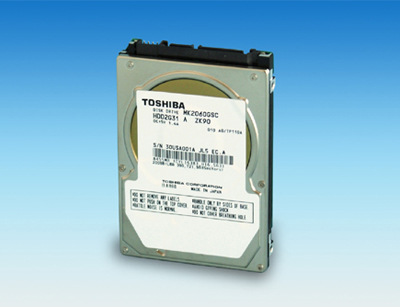 The launch of the new drives will enable manufacturers to deliver high storage capacity systems that offer exceptional levels of reliability. The MK2060GSC has been designed to operate in an altitude range of -300 to 5,650m and at operating temperatures of -30 to +85°C, and to deliver high levels of operating shock resistance (2,940m/s2) and increased vibration resistance. Telematics systems manufacturers deploying the MK2060GSC in high end cars can be confident of their products functioning normally, even in extreme environmental conditions.

Both products are also suitable for use in industrial settings where extended temperature tolerances are required. In line with Toshiba’s commitment to reducing its environmental impact, all drives are fully compliant with RoHS regulation and halogen free.

Toshiba introduced its first HDD for automotive application in 2001. The company’s highly durable and reliable products today command a share of approximately 75% of the global automotive HDD market, and cumulative shipments now stand at over 14 million units in the period to March 2010.

1. A storage capacity of 200GB realizes the industry’s largest capacity in a 2.5-inch HDD for automotive application (MK2060GSC).

Toshiba’s original technology improves the perpendicular magnetic recording technology head and disk and realizes a storage capacity of 200GB, the industry’s highest for a 2.5-inch HDD for automotive applications.

The magnetic head of an HDD floats approximately 1/100,000mm above the fast rotating disk. By adopting the latest aerodynamic design technology in the head slider design, the new drives can read and write data even in low-pressure conditions at high altitudes. They can operate at pressure as low as 495hPa (5,650m).

The new drives achieve chlorine and bromine concentrations below 900ppm, and a combined overall total below 1,500ppm.

MK2060GSC decreases CO2 emissions across the product lifecycle by 230g per year, by decreasing product power consumption and environmental burdens from the raw materials stage.

The new drives comply with the European Union’s RoHS directive on the elimination of six hazardous substances in electrical and electronic equipment.