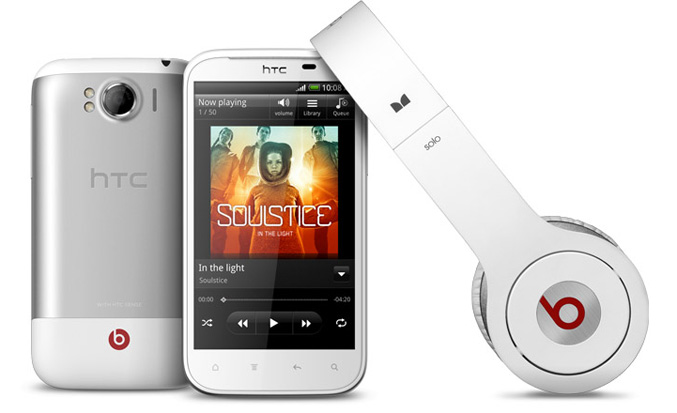 At a special event in London, HTC has unveiled its latest Android smartphone, a 4.7-inch giant called HTC Sensation XL which comes enriched with technologies from Beats Audio and a special pair of Beats headphones in the box.

The new phone previously known as the Runnymede, has machined aluminum body that is only 9.9mm thick and is fitted with 4.7-inch (800×480) Super LCD display, fortified with Gorilla Glass, under witch beats a 1.5GHz Qualcomm MSM 8255 single-core processor with Adreno 205 graphics, backed by 768MB of RAM and 16GB of internal storage.

HTC Sensation XL is running Android 2.3.5 (Gingerbread) with the Sense 3.5 UI on top, and audio tuning by Beats for better multimedia experience. It has a 8 megapixel main camera with BSI sensor, combined with a f/2.2, 28mm wide-angle lens, dual-LED flash and 720p video-recording, plus a a front-facing 1.3MP camera. Connectivity options include  HSDPA 14.4 Mbps support, a GPS, Wi-Fi b/g/n and Bluetooth 3.0, along with micro-USB and 3.5mm audio jack.

The smartphone measures132.5 x 70.7 x 9.9mm and weighs 162.5g with its 1600 mAh battery. The Sensation XL comes bundled with urBeats headphones which have a line-in remote and microphone for easy hands-free calling, and which the phone automatically detects when you plug them in the jack and optimizes the audio output accordingly.

The HTC Sensation XL is expected to be available across EMEA and Asia Pacific from early November. In EMEA, HTC will also be offering a limited edition bundle that includes special edition Beats Solo headphones.