Meizu has launched a new smartphone called M3E. The device is the first Meizu smartphone to come with a multi-functional mBack button that is connected to an mTouch 2.1 fingerprint reader. If you just touch the mBack button, the M3E smartphone will go one step back, if you press the key, the Home screen will open, and if you touch the button for a longer time, you will turn off the display. This is how the new mBack button works.

The M3E offers a fully metallic chassis that is the home to a 5.5-inch 2.5D display that works at Full HD resolution. The smartphone is based on a MediaTek Helio P10 chip and features 3 GB of RAM, 32 GB of internal memory and two cameras – a rear one with a Sony IMX258 sensor and 13 MP of sensitivity and a 5 MP front one. The smartphone also supports two nano-SIM cards, LTE Cat.6, VoLTE, Bluetooth 4.1 LE, 802.11n Wi-Fi and mCharge quick charging technology. Thanks to this you can recharge the provided 3100 mAh battery to 50 per cent in just 30 minutes.

Western Digital has announced the market availability of its newest product – a 1 TB VelociRaptor hard drive, which makes it the most spacious 10 000 rpm hard drive currently on the market. "WD is committed to providing customers with the best performing and most reliable SATA hard... 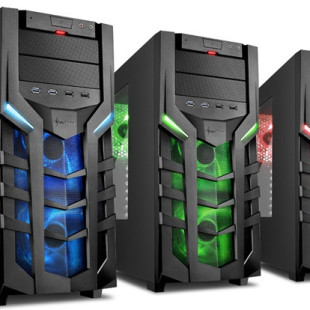 Sharkoon has announced the new DG7000 PC case that aims at demanding gamers. The new case comes with an acrylic side window as well as various lighting effects that will catch your attention for sure when looking at it and then more. Sharkoon has designed the DG7000 from the ground up with...