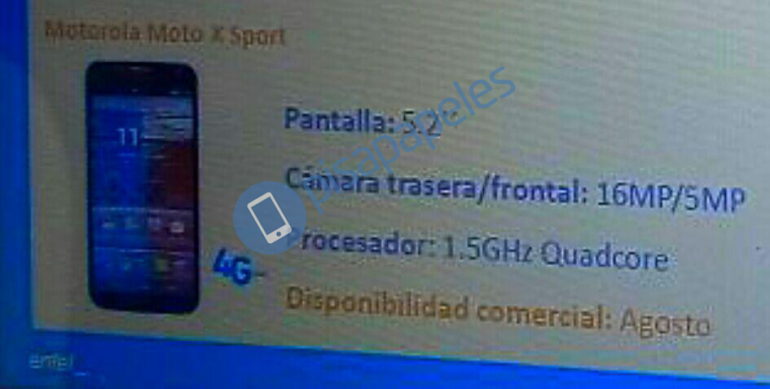 We haven’t seen any new Motorola smartphones on the market in the past few months but this will soon change, or so it seems. It looks like that apart from the 3rd generation Moto G smartphone, Motorola will soon launch two new smartphones under the Moto X Sport and Moto G Nuevo.

The news is unofficial so take it with some doubt but everything seems legit as of now. The two new handsets will appear in August and will serve different market segments. The Moto X Sport likely targets active people where the chance for them to drop their smartphone is higher so the Moto X Sport might as well be a rugged smartphone. As to the tech specs the Moto X Sport is expected to come with a 5.2-inch display, which is the same size featured in the 2nd generation Moto G. The handset will also have a 16 MP rear camera and a 5 MP front shooter. The whole thing will be powered by a 1.5 GHz quad-core processor but the brand and the model of the chip are unknown.

On the other hand the Moto G Nuevo will have a 5-inch display, a fast 1.4 GHz quad-core processor and a rear 13 MP camera as well as a 5 MP front camera. The information here is limited but we suspect that we might be talking about the third generation Moto G, which we wrote about a few weeks ago. We’ll know for sure when both Motorola handsets appear next month. There’s no word on pricing too.