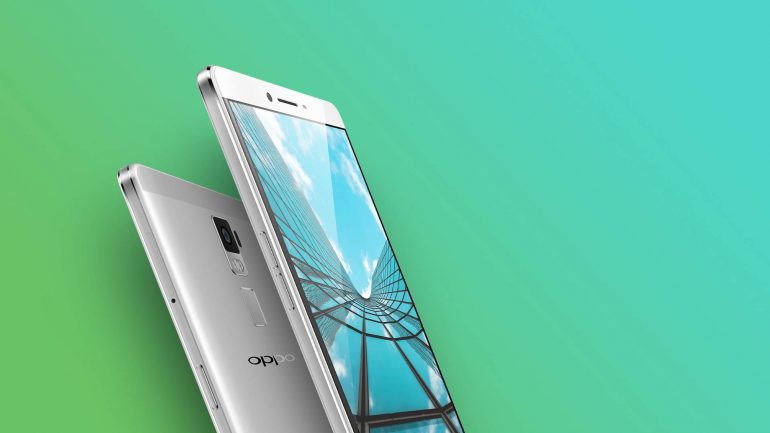 As expected earlier today the Chinese smartphone maker Oppo presented its Oppo R7 and Oppo R7 Plus smartphones. The smartphones share some of the tech specs but the R7 Plus offers a bit more as suggested by the name of the handset.

Both smartphones use Qualcomm Snapdragon 615 (MSM8939) processors with eight 64-bit cores at 1.5 GHz and include 3 GB of RAM, two cameras (one front at 8 MP and another rear at 13 MP), Wi-Fi, LTE, and Bluetooth 4.0. This is where the differences start – the Oppo R7 comes with 16 GB of internal memory, while the Oppo R7 Plus offers 32 GB but both models offer a microSD card slot for expansion. The displays also differ – the R7 has a 5-inch display, while the R7 Plus has a 6-inch display; in both cases the display operate at Full HD resolution and feature Gorilla Glass 3 protection. The cameras are not the same either – R7 Plus has dual flash, while the regular R7 has single flash only. The same goes for the Wi-Fi connection – the R7 Plus supports 802.11ac Wi-Fi, while the R7 will have to do with the slower 802.11n Wi-Fi. The R7 Plus has a fingerprint reader as well – something that the R7 lacks. The R7 Plus is powered by a 4100 mAh battery, while the R7 has a 2320 mAh battery. When it comes to the mobile OS used we have a difference as well – the R7 runs Android 4.4, while the R7 plus is on Android 5.1. Given the differences the R7 Plus measures 158 x 82 x 7.75 mm and weighs 203 grams, while the Oppo R7 measures 143 x 71 x 6.3 mm and weighs 147 grams. A nice touch is that the handsets feature quick charging – in just 5 minutes of charging the battery gets enough power for two hours of talk time.

The new Oppo R7 Plus costs USD 480, while the smaller Oppo R7 sells for USD 400. The smartphones are available now in China, while other countries will get them later.