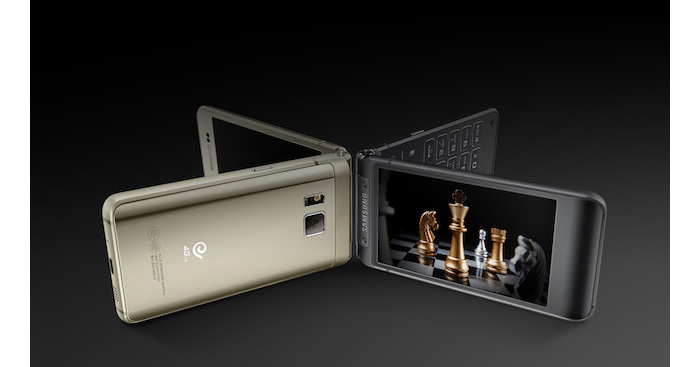 Samsung has announced its rumored flip smartphone – the W2016 – much earlier than previously expected. As you know, we reported on the device just a few days ago and now we have it, despite expectations that we would only see it in early 2016.

Now to the new smartphone – the device is a high-end communicator that is made of premium materials just like the Galaxy S6, Galaxy S6 Edge, Galaxy S6 Edge+ and other high-end devices. Now you have all this in a clamshell form for all the fans of this design. Here’s what you get – the so-called W2016 comes with glass and a lot of metal, which makes for a very stylish, yet sturdy smartphone. In addition to this the new W2016 incorporates some of the features of the recently launched Samsung Galaxy Note 5 – the curves on the back edges are the same and they give the W2016 the same comfortable grip. When it comes to hardware the device is impressive – it has two 3.9-inch Super AMOLED displays that work at 1280 x 768 pixels, an 8-core Exynos 7420 processor inside, a 16 MP rear camera, a 5 MP selfie camera, 3 GB of RAM, 64 GB of internal memory and a 2000 mAh battery. This is the Achilles heel of the device – the battery may not be up to the task of feeding so much powerful hardware but fortunately the W2016 supports both fast wired and wireless charging so this should help. Moreover the W2016 has support for two SIM cards, support for 4G LTE and runs Android 5.1.1 Lollipop.

Unfortunately there are two reasons that can make owning the W2016 a dream – the handset is very expensive because it sells for around USD 1560. In addition to this the device is available in China as of now with no information whether it will visit other markets or not.