Sharp Corporation will introduce into the Japanese market four models (60V-inch, 52V-inch, 46V-inch, and 40V-inch) of the LX Series “LED AQUOS” LCD TVs from November 10, 2009. Coming on the verge of 2010, the tenth anniversary of the first AQUOS LCD TVs, this series employs a newly developed LCD panel and an LED backlight.

Further advancements in the LX Series give it both improved image quality and environmental performance. Newly developed panels incorporate Sharp’s proprietary UV2A photo-alignment technology for bright whites and extremely deep blacks; and the LED backlight offers highly precise control of the light output. In addition, the combination of these newly developed panels and the LED backlight gives the LX Series high energy efficiency that results in the industry’s lowest level of energy consumption. 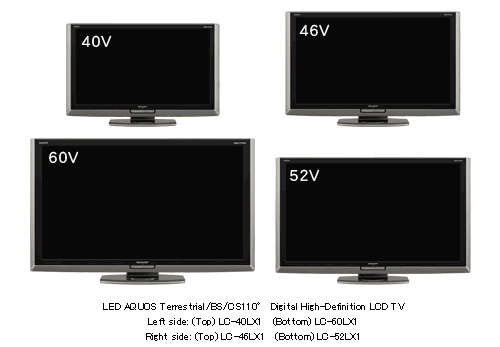 The LX Series offers a further evolution in digital image processing performance thanks to Sharp’s AQUOS High-Picture-Quality Master Engine image processing chip for highly precise reproduction of fast-moving images. The new Preferred Image Sensor not only adjusts to the room viewing environment and the on-screen content; it also automatically adjusts image and sound quality to the viewers’ personal preferences. In addition, the new AQUOS Familink II makes it even more convenient to access the relevant functions of peripheral devices and thus easily control them while watching TV.

The LED AQUOS represents the coming-together of Sharp’s years of expertise and knowledge in LED and LCD, along with its vertical integration in which all processes from device development to final product manufacture form a virtuous upward spiral. Since introducing the AQUOS as the TV for the 21st century in January 2001, Sharp has always aimed for the pinnacle of flat-screen TVs. Sharp will release the LED AQUOS globally in an effort to bring a new TV lifestyle to people around the world.