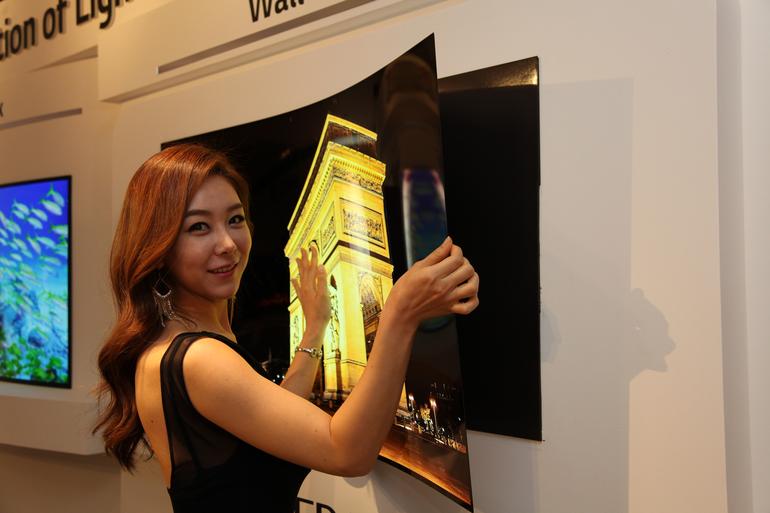 LG Display, a division of LG, has demonstrated the world’s first OLED display that is less than a millimeter thick. The display is 55 inches large, weighs 1.9 kilograms and is just 0.97 mm thick, which makes it perfect for wall-mounting.

The display uses a magnetic mat that must be situated behind it in order for you to use it on a wall. Removing the display is even easier – all you have to do is just “peel” the display off the mat. Unfortunately the display is not for sale and is equally far away from the TV store near you – the demonstrated display is just a proof-of-concept display that shows LG’s plans for the future when it comes to OLED displays.

In a few words LG plans to focus on OLED displays for the next few years. The company thinks they have a great future and that they are a groundbreaking technology. OLED displays include an organic compound layer that allows the creation of ultra thin displays but these displays can also be curved. The organic material that sits behind what you see emits light on its own, which also eliminates the need for a backlight. This is the reason why OLED can be used not only in TVs but also in other gadgets such as various mobile devices and wearables.

Unfortunately OLED displays are still expensive but despite this fact LG believes it will be able to sell more and more OLED displays each year. In fact LG expects that within 10 years OLED will be the dominating technology that will finally retire the good old LCD displays.