Atomic in Size, Atomic in Power
With the Rampage II GENE, ASUS has masterfully filled the mATX gap in its lauded ROG product line. For the first time, users will be able to harness the full power of the Intel® Core™ i7 processor in a chassis the fraction of the size and weight of an ATX desktop PC. The Rampage II GENE’s awesome combination of overclockability, tweakability and stability enable it to easily outgun other full-sized ATX motherboards. 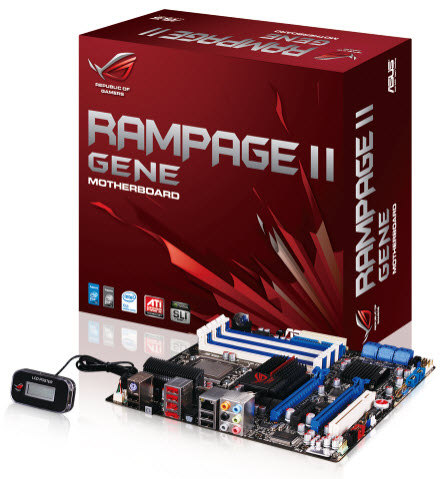 MemOK! Any Memory is A-Okay!
MemOK! was developed to provide users with a worry-free memory upgrade experience. In the event of a boot failure after installing new RAM, all the user has to do is press an easily accessible button on the motherboard and MemOK! will automatically load the failsafe settings needed to ensure a successful system boot. MemOK! is able to rapidly detect and resolve memory issues—even if bad or unstable memory is used!

Note: Specifications are subject to change without prior notice. Please visit www.asus.com for more details.