Panasonic has added another Micro Four Thirds camera to its product list and the novelty is now officially called the Lumix GF5. Sporting 12.1-megapixels under the hood the Lumix GF5 is the successor to the GF3 digital camera and bests it in almost every direction.

For one thing the Lumix GF5 introduces a new Live MOS image sensor along with the latest version of Panasonic’s Venus Engine with Multi-process Noise Reduction, which both provide a maximum of 12 800 ISO and 0.09 s autofocus. It’ll also shoot 1080i Full HD video.

On the back you will find a new 3-inch 920k dot LCD touchscreen, doubling the resolution of the 469k dot GF3 for higher-quality previews and smoother menus. There’s the usual pop-up flash too and the camera can be set to both lock focus and fire off a frame when a point is tapped on the touchscreen. 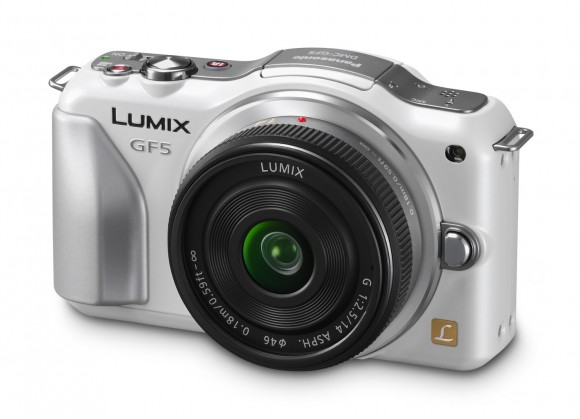 As to the focusing the Lumix GF5 now comes with full area focusing and Contrast AF, which is controlled by an image sensor. There’s also Pinpoint AF, which enlarges the point of focus for more accurate selection in the scene; AF tracking can then follow that subject around. In addition video now is recorded in MP4 AVCHD format, with Dolby Digital Stereo Creator audio, and there’s in-clip Touch AF and a dedicated recording button on the top.

The Lumix GF5 will be commercially available “later this year” for a price of 599 USD with a 14-42mm standard zoom lens. If you want the 14-42mm power zoom lens you will have to pay 749 USD. The GF5 will also be available in black, white and red. For all those photography fans Panasonic has also prepared a Lumix G experience app – that lets you experience it before you purchase it.