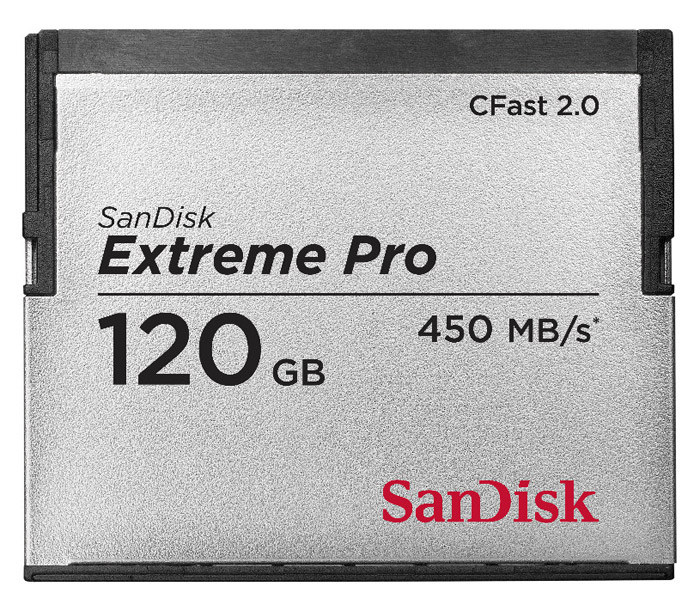 Designed for professional broadcasting, cinematography and next generation photography the SanDisk Extreme Pro CFast 2.0 line offers two models with capacities of 60 GB and 120 GB. While the capacity is good, the new memory card line crushes all competition with its record speed – so fast that SanDisk says these are the world’s fastest memory cards. The 120 GB model reaches read speed of 450 MB/sec (3000x) and write speed of up to 350 MB/sec (2333x) for faster recording performance. With the new card professionals will not have problems transferring huge files – for example a 100 GB file can now be transferred in 4 minutes at 450 MB/sec speed; before CompactFlash technology required about 20 minutes to transfer at 90 MB/sec.

“With the SanDisk Extreme Pro CFast 2.0 card, we are enabling a next generation card format to meet the needs of high-end professional cinematographers,” said Dinesh Bahal, vice president, product marketing, SanDisk. “These cards will enable new digital solutions for professional filmmakers looking to embrace technologies such as high-quality 4K video, and are another example of SanDisk’s innovation and leadership in flash memory storage.”

The new technology has already found support in major manufacturers such as Canon and ARRI – a leading motion picture equipment manufacturer. As if all of this is not enough the new SanDisk Extreme Pro CFast 2.0 card enjoys high reliability and durability. The cards have been created to withstand real world exposure, including but not limited to shock, temperature and vibration and include a pin less design, which lessens the chance of damaging the card or camera when changing cards.

The SanDisk Extreme Pro CFast 2.0 card is now available in the United States and Europe. Pricing is unknown.