Fold the World is an app that belongs to the so-called folding genre where you must fold paper in order to achieve a goal or create a new and interesting object. In other words Fold the World is a puzzle game that will test your brain skills.

The gameplay inside the game is nothing that hard or unusual – there are many levels to complete, which is nice, and each level requires some thinking on your behalf. The goal is to lead a funny creature from point A to point B and to help with obstacles you must fold the paper on which the creature sits to overcome them. Each level is different, though, so more often than not you will find yourself thinking how to achieve your goal. If you get stuck, the game offers hints so do not quit Fold the World that easily.

As to graphics and sound we have only nice words to say – the game comes with great and colorful 3D visuals as well as great sound effects that are summed up in a playful song that you will get to listen to. Fold the World is one of the better games in these two departments and we have nothing bad to say about this game.

Fold the World is here on Google Play. Enjoy!

Crucial has launched a new line of solid state drives that are to serve as cache for your computer. The new drives belong to the Adrenaline line of SSDs and are available now. The Crucial Adrenaline Solid State Cache Solution has been specifically designed for boosting the...

Thermaltake Level 10 GT computer case s a much more affordable successor to the original Level 10 rig which was designed in collaboration with BMW Group Designworks USA. The design follows the Level 10's design and has an oversized side panel. It has dimensions of 584 x 282 x 590 mm and... 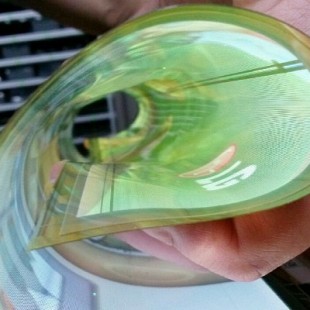 Truly flexible displays have been a dream for many years and although some such displays appeared a while ago they were never really able to twist. Now all this may change for real thanks to the efforts of LG that has demonstrated an 18-inch OLED display panel that can be rolled into a cylinder...