Fujitsu Microelectronics Asia Pte Ltd announced the launch of a new graphics controller System-on-Chip (SoC) for automotive infotainment systems, such as next-generation car navigation and digital dashboards. The new controller, the MB86298, offers the highest-class graphics capability for embedded systems, as well as an industry first of providing output to up to 4 displays, and up to 4 video inputs.

Featuring superior input and output functionality, the MB86298 can process 4 inputted video streams while outputting video to 4 displays. The inputted videos can be modified, synthesized together, and put on 3-D graphics surfaces within a single screen. Subsequently, with 4 cameras mounted on all sides of the automobile (front, back, left, and right), it is possible to freely choose the desired viewpoint and form for display. In addition, the controller’s industry-leading capabilities enable display of 8 layers and inter-layer blends (*1), where each information stream is processed separately so that users can selectively change the information screen to be displayed, as well as being able to synthesize the information streams together smoothly and display them. 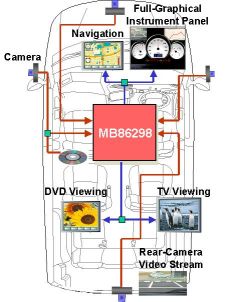 Figure 1: Example of the MB86298 controller at the nexus of an in-vehicle infotainment system

In recent years, the amount of electronics in automobiles has continued to rise, providing information and entertainment to the driver and passengers, bringing about increased safety, more comfort and reduced environmental impact to the driving experience: for example, car navigation systems that change with real-time traffic information, video from blind-spot cameras, streaming TV and DVD video to passenger seat displays, and so-called “eco-drive” functions which support low fuel consumption by displaying information of the car’s running condition.

There are increasing needs to simultaneously show several video and image streams to several displays within the automobile, such as showing different images to the driver’s seat and front passenger seat (dual-view LCD displays), and viewing TV and DVDs on the rear seat displays. At the same time, automotive infotainment systems that capture and display information of the vehicle’s periphery from several cameras mounted on the vehicle have emerged. Subsequently, such automotive systems demand high-performance graphics SoCs that can process in real-time several different images and video streams, and process such large volumes of imaging data at high-speed.

On a single chip, this new MB86298 controller contains the necessary functions demanded for next- generation automotive infotainment systems, providing high-speed video and graphics processing to handle an industry first of 4 video inputs, and output to 4 displays. This controller can not only realize systems which show navigation images to the driver – while showing TV and videos to the passenger displays – as previously possible, but can also process and display the dashboard instrument cluster in 3-D graphics, including meter needles. In Addition, the controller can handle the inputs from 4 cameras (front, back, left, right) mounted on the vehicle and process them and synthesize them together in real-time. Also, for car navigation 3-D mapping, this controller can output to high-resolution 1600 x 600 pixel displays to bring out rich image detail, not just of the roads, but of surrounding buildings and scenery.

2. Dither function: A function that can produce intermediate colors on displays that have few colors.

3. Gamma function: A function that corrects color data to match the display characteristics.

5. Programmable shader: A function used in 3-D graphics that can render objects to be real-life looking by allowing the user to freely program to match the image they are trying to create, rather than the fixed shading processing previously used.

6. OpenGL ES: A subset of OpenGL for embedded devices. OpenGL is a standard program and library to handle graphics on computers.