Have you ever wanted to have a pet that does not need any care? Here’s something that may completely fulfil your desire.

The Japanese company Tomy has created the latest and greatest in the virtual pet world – a smartphone-controlled dog named i-SODOG that can dance in time to downloaded music, walk, sit and be given commands to carry out such as shake hands.

The i-SODOG is a follow-up to i-SOBOT, which was a bipedal robot released in 2007. 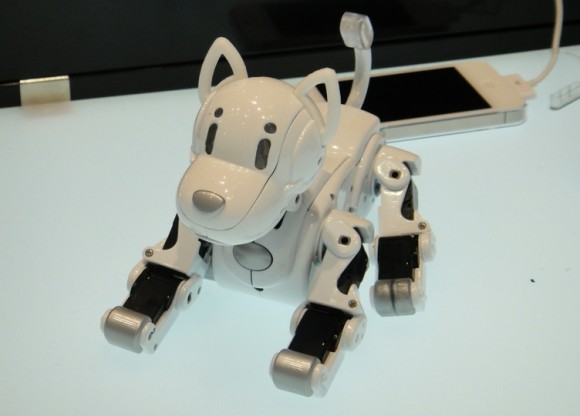 The robot has sensors in its head and back, two microphones, and can recognise up to about 50 different spoken words. It also has a biometric sensor in its nose, allowing it to talk to other robots and pass over information. This replicates the idea that cats and dogs have a sixth sense, enabling them to communicate through static electricity. If someone touches the noses of two robots, they can share information with each other.

The i-SODOG comes with an own special controller but in case you own a smartphone you can control the robot dog using a special application. For example, if you tilt the phone from side to side you can make the dog lean left or right. You can also earn game points whilst playing with i-SODOG, which can then be converted into virtual food so you can feed him.

The robot dog targets children of all ages and Tomy hopes to release the toy to the mass market next year. The i-SODOG will retail for around 400 USD.