Want to create a Home Theater PC (HTPC) that supports the most popular interface – HDMI? Want to watch Blu-ray discs at full HD 1080p? Global graphics cards and motherboards brand-manufacturer, MSI International, announces the all new R4600 HDMI series of graphics cards1.
As the name implies, this card has native HDMI output, as well as digital 7.1 sound channels, plus solid state and high quality Hi-c capacitors for more stable performance. With this card your Blu-ray discs run lag-free so you can enjoy the beauty of hi-def visuals and sound for a performance you can be proud of. If you are looking to make a home theater PC, the MSI’s R4600 HDMI series is your graphics card of choice. 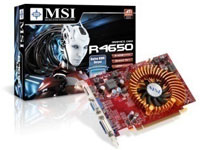 Complete HDMI output for the whole series
MSI’s R4600 HDMI’s entire series has native HDMI output to allow direct connection of your pc with hi-def TVs, monitors and projectors. Supporting full HD at a resolution of 1920×1080, this card presents beautiful colors and imagery. The 7.1 sound channels makes a fantastic base for setting up a total family entertainment system with total surround sound – just like a movie theater! The R4600 HDMI series also supports Unified Video Decoder (UVD) 2.0, so that the CPU is not decoding the entire digital stream itself, which helps lessen the amount of electricity used by the CPU and prevents lag. In this way, the card also helps to cut down energy use and does its part to help protect the environment.

SSC (Solid State Choke)
The MSI R4600 HDMI series power connector module uses the latest solid state chokes (SSC), something rarely seen on cards at this level. SSC’s not only help to extend the life of the card and increase stability, they also help prevent high electrical frequencies from creating a buzz noise. For those who insist on maintaining a strict inner zen of peace and serenity, this is the perfect feature.

Slight size, Power-saving, Low-temp, Multimedia system VGA card – the number one choice
Aside from full series HDMI support, Hi-c capacitors, and SSC design, the MSI R4600 HDMI series keeps its total power use to a maximum of 75W and does not require an extra PCI-E 12v power supply. It is made to fit almost any PSU – including those with low-wattage power supplies. Additionally, the series equips a high-performance cooling pipe system with a slim design that won’t infringe on other PCI-E/PCI space2. Small and powerful, the cooling system’s design ensures silent operation, while keeping the card cool so the user only hears what he/she wants. MSI’s R4600 HDMI series is made especially for multimedia performance, and is the number one choice for those building a media PC system.