Sony Computer Entertainment Europe (SCEE) further expanded its PlayStation® entertainment experience today with the launch of the PlayStation®Network video delivery service for Europe. Now available in France, Germany, Spain and the UK, with other countries to follow in 2010, the service allows film fans to download hundreds of movies, including the latest releases, straight to their PlayStation®3 (PS3™) and PSP™ (PlayStation®Portable). 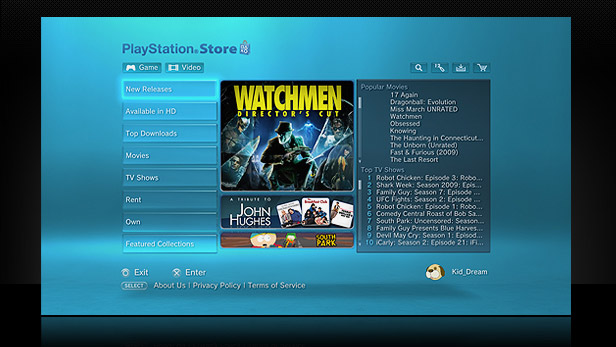 Titles available within the launch window include Angels and Demons; Bruno; Disney/Pixar’s Cars; Walt Disney Pictures’ The Chronicles of Narnia: The Lion, The Witch and The Wardrobe; Crank 2; The Dark Knight; Dead Space: Downfall; Drag Me to Hell; Gran Torino; Harry Potter and the Order of the Phoenix; National Treasure; Pirates of the Caribbean: The Curse of the Black Pearl; Public Enemies; Star Trek; Terminator Salvation; Transformers 2: Revenge of the Fallen; and Valkyrie; and X-Men Origins: Wolverine. Additional content will be added on a weekly basis.

“The launch of the PlayStation Network video delivery service extends our entertainment offering and provides consumers with another way to access their favourite movies, whether at home or on the go,” said Andrew House, President and CEO, Sony Computer Entertainment Europe. “With the choice of content constantly expanding, including full games, bite-size downloadable “minis” games, demos and now movies too, the PlayStation Network is the gateway to a world of entertainment.”

At launch, there will be a special offer for existing PSN members, allowing them to receive a complimentary copy of The Da Vinci Code if they buy Angels and Demons. There will also be a special promotion to encourage new members. Anyone who registers for a PlayStation®Network account using their new PS3s between 19th & 30th November 2009 will receive a voucher to download a complimentary copy of Transformers to own3.

Located on the PlayStation®Store under the “Video Store” section, the PlayStation Network video delivery service provides consumers with an exceptional entertainment experience, adding HD and SD movies for rental or purchase, to the already comprehensive line-up of games, demos, trailers and other content.

The video delivery service will be fully integrated within the PlayStation Network, using the same log-in, wallet system and user-interface. Visitors can search for movies by name, or can browse categories such as “new releases”, “genres” and ”most popular downloads”. PS3’s progressive downloading allows viewers to start watching a film shortly after the download begins. They can also access certain games or other content on their PS3 while the download is taking place.

Consumers who choose to rent have up to 14 days to watch their movie, and, once playback is started, they have 48 hours to watch the content. Purchased movies are stored on the PS3 hard disk drive and can be accessed at home via PS3 or transferred to PSP for content on the go.

The PlayStation Network video delivery service takes prime position in a line-up of PlayStation entertainment features, alongside streaming music video with VidZone®, Catch Up TV services and free digital TV viewing with PlayTV™. With games, music, Internet, photos, communications and more, it’s yet another reason to make PS3 and PSP the heart of your entertainment world. To find out more, visit  “http://www.eu.playstation.com” www.eu.playstation.com.