Nintendo of America Inc. and Netflix, Inc.  today announced an agreement that will allow Netflix members who are also owners of Nintendo’s Wii™ home console to instantly watch thousands of movies and TV episodes streamed from Netflix directly to their TVs. Netflix is scheduled to go live on the Wii console this spring in the United States at no additional cost to Netflix members who have a plan starting at $8.99 a month, a Wii console and a broadband Internet connection. 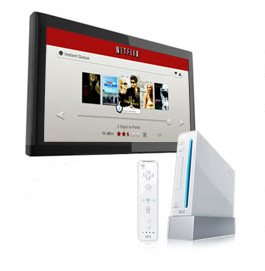 The partnership between the two companies will extend the reach of content streamed from Netflix farther than ever before, thanks to the mainstream popularity of the Wii console. Wii remains the fastest-selling home console in history, and reaches more consumers than any other device that currently supports streaming movies from Netflix. In December 2009, Nintendo sold well in excess of 3 million Wii consoles in the United States. Wii is the top-selling home video game system of this generation, and as such brings the Netflix experience to a broad and diverse mass market.

“Our research shows that 86 percent of all U.S. Wii consoles are located in the living room,” said Nintendo of America President Reggie Fils-Aime. “The Wii console is the social hub around which friends and family members gather to play games and have fun. Soon both new and longtime Wii owners will enjoy the benefits of Netflix – and a variety of informational and entertainment options – by being Netflix members and connecting their consoles to the Internet.”

“Our goal is to offer Netflix members as many ways as possible to watch movies and TV episodes streamed from Netflix right to their TVs and to give non-members more and compelling reasons to consider the service,” said Netflix co-founder and CEO Reed Hastings. “Joining forces with Nintendo, which has been so immensely popular with consumers since its introduction, is a very meaningful step in that direction.”

With 11.1 million U.S. subscribers as of Sept. 30, 2009, Netflix continues to expand the ways in which its members can watch movies and TV shows streamed directly to TVs via a range of Netflix-ready devices such as the Wii console. Netflix memberships start as low as $8.99 a month, and members also can receive unlimited DVDs delivered quickly to their homes. At the same time, consumers continue to demonstrate a preference for Wii consoles, which offer tremendous value, whether measured in fun games, shared experiences or the suggested retail price of just $199.99.

To enable their systems to stream content from Netflix, Wii owners will need a Netflix instant-streaming disc for the Wii console, which will be available at no additional cost to Netflix subscribers. The free disc looks and operates the same as a disc-based Wii game, and the entire user experience will feel natural and intuitive to Wii console owners. Netflix members and Wii console owners can now reserve a free instant-streaming disc by going to www.netflix.com/Wii. Once available in the spring, the discs will be delivered for free by first-class mail.

When the instant-streaming disc is inserted into a member’s Wii system, an array of movie and TV choices will be displayed right on their TV screen. These titles will be conveniently organized into a variety of categories based on members’ personal preferences and will include popular genres, new arrivals and members’ individual instant Queues. Using the Wii Remote™ controller, members will be able to choose a movie or TV episode to watch from their instant Queues or pick one directly from any of the lists. They will also have the ability to read synopses and rate movies, and will have the option of fast-forwarding and rewinding their selection.

Netflix adds another dimension to the Wii console’s diverse online features, which range from downloadable new and classic games in the Wii Shop Channel, to online multiplayer gaming with games like Mario Kart™ Wii, to video highlights and information about titles for the Wii and Nintendo DS™ systems via the Nintendo Channel™.