ASUS, a leading producer of innovative networking solutions,  announced the ASUS RT-N16, a technologically-advanced wireless router with a host of intuitive, easy-to-use features. Engineered for the future, the ASUS RT-N16 is a Wireless-N Gigabit Router offering three “S’s” that fulfill users’ all-around networking needs that no other brand can provide—Speed for ultra-fast data transfers, Simplicity for unparalleled ease-of-use and ease-of-setup, and Security for absolute peace of mind when performing online tasks. Such an unprecedented integration of powerful performance and user-friendly operation makes the RT-N16—and ASUS’ full range of routers—the best choice on the market.

Speed: With a maximum wireless speed throughput of 300Mbps and 8 times faster operation, the ASUS RT-N16’s data transfer performance is outstanding. It also enables 24/7 downloads to wireless clients even when PCs are turned off.

Simplicity: The ASUS RT-N16 is equipped with an innovative EZ UI which lets administrators easily setup and manage their network environments. Home and business users can seamlessly allocate bandwidth to suit their specific needs, share multimedia content and setup printer or scanner functions. 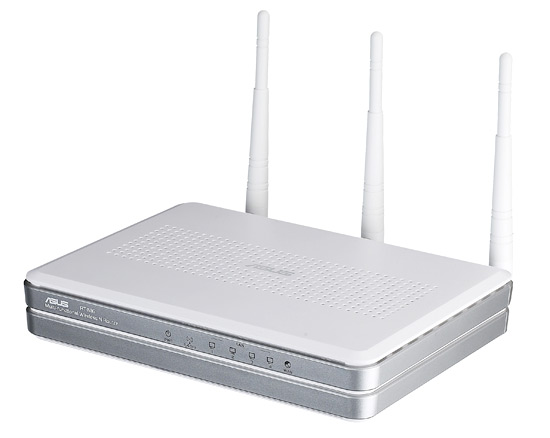 Security: With support for WPS (Wi-Fi Protected Setup), the ASUS RT-N16 lets users set up secure Wi-Fi Networks within minutes and lock down the network to prevent potential intrusion by unauthorized outsiders.

Ultra-fast and Convenient Downloads with the Revolutionary Download Master

Additionally, the Download Master provides up to 300,000 sessions for unparalleled P2P performance—offering an unprecedented 20 times larger bandwidth than traditional routers. Such a large volume of P2P or BitTorrent downloads are accomplished rapidly with assurance of complete data transfers throughout the day—even when the users’ PCs are turned off. Despite such heavy loading, the ASUS RT-N16 can still allow more user connections onto the Internet, letting them run multimedia applications with ultra-stability.

The ASUS RT-N16 wireless router features EZ UI, a powerful graphical user interface that helps users manage their networks as well as set up a shared printer with the greatest of ease. With its auto-detection and network mapping capabilities, the wireless router simplifies the setup of multiple wireless clients. EZ UI comprises a whole host of innovative connectivity features such as the EZQoS, All-in-one printer, AiDisk, QIS (Quick Internet Setup), Network Map, Dr. Surf, and EZ MFP—all of which are controlled and managed through a single user interface.

The magnificent EZQoS feature lets an administrator easily allocate different bandwidth according to individual user needs, ensuring the smooth flow of data traffic and providing uninterrupted IP phone and A/V streaming. To support network usage of a shared printer, the EZ All-In-One Printer function allows multiple users to simultaneously access a printer and use its print and scan functions. Businesses can thus empower wireless users to perform printing tasks on networked printers without having to purchase a printer server. Another convenient feature is AiDisk which allows users to engage in file-sharing among peers in three easy steps.

The ASUS RT-N16 keeps streaming data safe from prying eyes with robust built-in WPS (Wi-Fi Protected Setup) capabilities. All data is automatically encrypted to prevent unauthorized viewing of information by an outsider. By supporting WPS, the ASUS RT-N16 lets users set up secure Wi-Fi Networks within minutes and lock down the network to prevent potential intrusion by unauthorized outsiders.