Toshiba Corporation announced an expanded line-up of NAND-flash-based solid state drives (SSDs) based on the company’s 32nm Multi-Level- Cell NAND flash memories. The new drives include the industry’s first 128-gigabyte (GB) Half-Slim/mSATA SG Series SSD modules, ideally suited for a variety of applications including mini-mobile and netbook PCs, and the HG Series that delivers all the high level performance and endurance essential for notebook computers and for gaming and home entertainment systems. Both drive series will be showcased for the media at Digital Experience! at the Mirage Hotel, Las Vegas, on Wednesday, January 6, the eve of the International Consumer Electronics Show 2010.

Samples of the new drives will be available in the first quarter (January to March) of calendar year 2010, with mass production scheduled for the second quarter (April to June).

The SSD Series introduces the industry’s first 128GB mSATA and Half-Slim modules, the fruits of Toshiba’s layering technology, drives that are ideal for application in mobile applications, such as mini mobile PCs and netbooks. With a maximum sequential read speed of 180 MB per second (MBps)2 and a maximum sequential write speed of 70MBps, SSD Series drives provide greater design flexibility and offer space and cost savings that surpass SSDs in hard drive form factors and cases: the 128GB modules are only one seventh the volume and one eighth the weight of 2.5-inch form factor SSDs, and consume a fraction of the power. 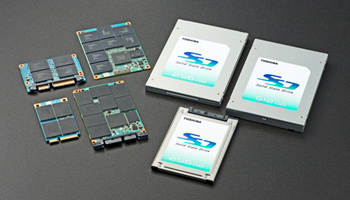 Toshiba’s 3rd-generation HG High Performance SSDs deliver the performance needed for higher end notebook computers, with an advanced MLC controller that supports higher read speeds, parallel data transfers and wear leveling to optimize performance, which increases reliability and endurance. The drives achieve improved system responsiveness with a maximum sequential read speed of 250MBps2 and maximum sequential write speed of 180MBps, and improve the overall computing experience with faster boot and application loading times. They will be made available in 64GB, 128GB, 256GB and 512GB capacities in a standard 9.5mm (2.5-inch case), and in a special 7mm thin 2.5-inch case in 128GB and 256GB capacities. Smaller 1.8-inch drives are available in 64GB, 128GB and 256GB capacities in a standard 1.8-inch disk drive case or as caseless or LIF-modules. The drives also offer AES data encryption to support only authorized data access. 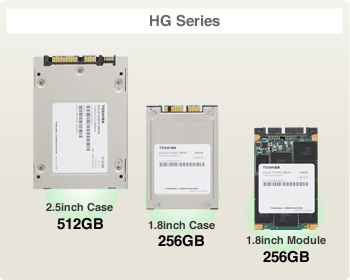 Both new series support the TRIM command implemented in Windows 7. In earlier models of SSD, a data block from which data was deleted was flagged as not in use and ignored by the controller. Once all the memory cells were written to once, this approach slowed down SSD operation. TRIM enables the OS to tell the SSD controller that the data can be actually deleted, freeing the blocks for subsequent use and maintaining SSD performance across its life. 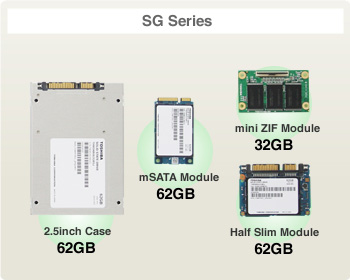 Toshiba will continue to promote innovations that widen the horizons of the NAND Flash market and support its continued leadership in that market. The company will spur demand for SSDs in notebook PCs, netbooks, laptops and digital consumer products by enhancing its line-up, offering products with different densities and interfaces in a range of packages, while advancing device performance. For more information on Toshiba SSDs, please visit http://www.semicon.toshiba.co.jp/eng/product/ssd/