The new IC, the MB88395, can simultaneously transmit multiple streams around the vehicle, such as HD video from Blu-Ray DVDs, digital TV, audio and car navigation images. The new IC realizes this by utilizing a high-speed 800Mbps physical layer as well as Fujitsu’s proprietary SmartCODEC that provides high compression and which can transmit HD video without perceptible lag. This not only brings the rich HD experience to rear-seat entertainment, but reduces the system cost of in-vehicle multimedia networks by a maximum of 30%, while reducing the number of wire harnesses (cables) by a maximum of 70% to reduce vehicle weight and improve fuel efficiency. Sample shipment of the new MB88395 will begin from April 22, 2009. 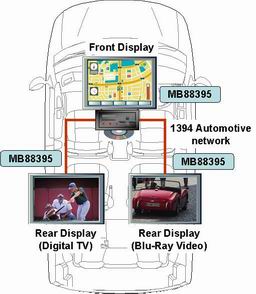 There is increasing attention being paid to 1394 Automotive for in-vehicle multimedia networking, and it is expected to become common in the automotive market. The reason for this includes the gradual shift to digital TV in each country, the increased availability of HD content, as well as the analog output from Blu-Ray players to be stopped from 2013, making 1394 Automotive necessary for the upcoming flood of digital transmissions through in-car networks. Anticipating the future needs for rear-seat entertainment systems, Fujitsu Microelectronics lead other vendors in introducing 1394 Automotive controllers in 2005, and with this new 1394 controller co-developed with Fujitsu VLSI Limited, allows more HD video content to be easily and flexibility viewed throughout the vehicle. 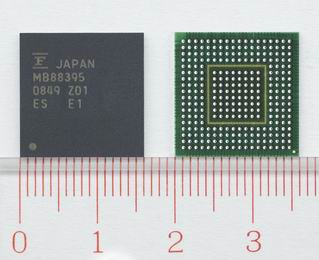 This was emphasized by Yuji Kawaguchi, Operating Officer of Honda R&D Co., Ltd. in saying, “Honda R&D welcomes the MB88395, the first IC to provide the 800Mbps speeds of the 1394 Automotive spec. The importance of high-speed digital transmissions will increase further in the future to handle in-vehicle multimedia as well as to reduce weight. 1394 Automotive is an in-vehicle network that can enrich entertainment and comfort. We plan to promptly evaluate the MB88395.”

The key to the capabilities of the new controller are the physical layer compliant with the 800Mbps specification of 1394 Automotive – double the 400Mbps of the previous product – as well the a version of the SmartCODEC compression codec for video that has an even higher compression ratio, compressing video to one-fourth (1/4) it’s original size, compared to one-third (1/3) that of the previous product. The SmartCODEC, which was developed by Fujitsu Laboratories and is used in the BT.601 Transport Over IEEE-1394 standard, can compress and decompress high resolution video in 2 to 3 milliseconds(2-3ms) without any perceptible annoying time lag or out of sync contents, which can be a problem when watching the same contents on the front and rear monitors.

This results in the ability to transmit HD video from Blu-Ray DVDs and digital TV, as well as high-resolution navigation images, within the vehicle without any perceptible time lag, making this the first IC in the world to allow multiple streams of HD video and navigation images over 1394 Automotive. For example, a HD video stream (1,280 dots x 720 lines) from a Blu-Ray DVD that has been decompressed has a rate of 885Mbps. With subsequent compression to one-fourth (1/4) with SmartCODEC, the rate becomes 249Mbps, so two (2) channels can be transmitted in the 800Mbps bandwidth that was not possible over 400Mbps products.

Going forward, Fujitsu Microelectronics plans to expand its lineup of 1394 Automotive ICs to handle the increasing information streams in automobiles, such as video content and peripheral cameras on the vehicle, as well as to drive further reductions in system costs. These in-vehicle networking chips complement Fujitsu Microelectronics’ strong presence in automotive ICs for processing graphics and video.