It does not require any physical movement such as pressing buttons. This technology will be further developed for the application to human-friendly products in the future by integrating it with intelligent technologies and/or robotic technologies. 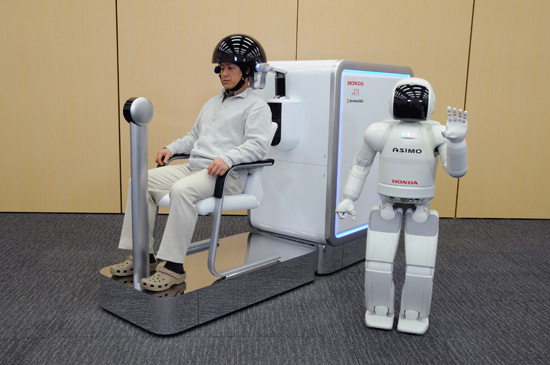 During the human thought process, slight electrical current and blood flow change occur in the brain. The most important factor in the development of the BMI technology is the accuracy of measuring and analyzing these changes. The newly developed BMI technology uses EEG, which measures changes in electrical potential on the scalp, and NIRS, which measures changes in cerebral blood flow, with a newly developed information extraction technology which enables statistical processing of the complex information from these two types of sensors. As a result, it became possible to distinguish brain activities with high precision without any physical motion, but just human thought alone.

The BMI technology announced by HRI-JP and ATR in 2006 used a functional magnetic resonance imaging (fMRI) scanner to measure brain activities. The large size and powerful magnetic field generated by the fMRI scanner limited the locations and conditions where it can be used. As the newly developed measuring device uses EEG and NIRS sensors, it can be transported to and used in various locations.

Test procedures for experiments with the new BMI

First, EEG and NIRS sensors are placed on the head of the user. Then, one of four pre-determined body part options is provided to the user. The user imagines moving that body part without making any physical movement. Changes in both brain waves and cerebral blood flow triggered by the brain activity are measured simultaneously. The data obtained are analyzed on a real-time basis to distinguish what the user imagined. Upon receiving the result, Honda’s ASIMO humanoid robot makes corresponding movements such as raising its arm or leg. The world’s highest level accuracy rate of more than 90% was achieved in the tests.

Since 2005, Honda and ATR have been conducting research and development of BMI technology exploring the potential of a new interface which connects people and machines. Honda is looking into the possibility of applying this technology to a people-friendly human interface through integration with other technologies such as artificial intelligence technologies and/or robotics technologies. In May 2006, Honda and ATR successfully developed a BMI technology which utilizes a fMRI scanner and achieved the first success in the world to control a robot hand by decoding brain activities without electrode array implants or special training of the user.

While conventional machine-interface uses devices such as switches which need to be operated by a user’s hands or feet, BMI uses brain activity data measured by various devices and enables non-contact control of the machines (such as robots). Invasive BMI, which is widely studied by U.S. and European researchers, requires the surgical implant of electrode arrays, whereas non-invasive BMI uses sensors touching the user’s scalp.