MSI implements a combination of eSATA and USB in one port: Power eSATA. Normally eSATA devices need extra power via an adapter or an extra USB cable. This combo port supplies the needed power, so no extra USB cable for power is needed.

Power eSATA is 8x faster in transferring data than normal USB ports. Additionally, MSI is the first manufacturer to use Power eSATA on an AM3 mainboard: MSI 790FX-GD70. MSI also uses Power eSATA on many of its latest notebook series. Please visit our Power eSATA microsite on here.

Current eSATA usage
Portable storage devices (like 2.5″ harddrives or Flash drives) are getting larger and much faster. USB is getting too slow to fulfil the demand of these faster storage devices so eSATA is gaining popularity. The eSATA connector does not transfer power needed by external storage devices, so most times either an external adapter or an extra USB cable is needed. Because of this, the user has one less USB port to connect other applications and the extra cable causes inconvenience on a desk. 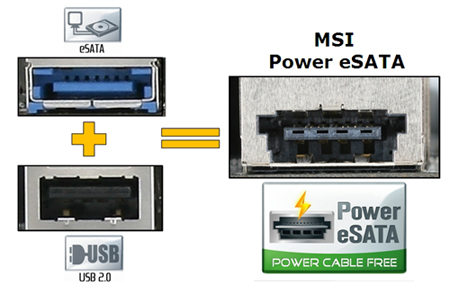 MSI Power eSATA solution
To solve the inconvenience, MSI implements a combination of eSATA and USB in one port: Power eSATA. This combo port supplies the external eSATA device with the needed power, so no adapter or extra USB cable is needed. Now the USB port is free to connect other devices to. Moreover, Power eSATA is 8x faster in transferring data than normal USB ports so files are transferred much faster.

First AM3 MB with Power eSATA: MSI 790FX-GD70
MSI 790FX-GD70 mainboard, which is equipped with DrMOS and APS, is the first AM3 board with Power eSATA on the market to take full advantage of OCZ’s Throttle eSATA drive. This portable storage device delivers faster transfer rates and cost effective expansion storage. The throttle is available in high densities and offers exceptional peak interface speeds for high performance notebooks, desktops and consumer electronics.

Huawei to launch Glory 6 Plus smartphone 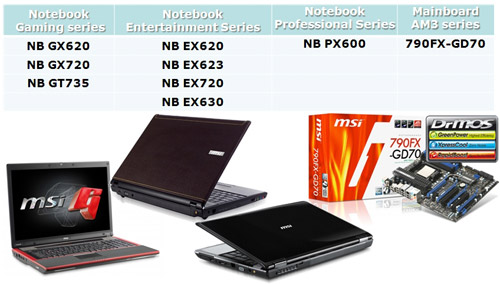