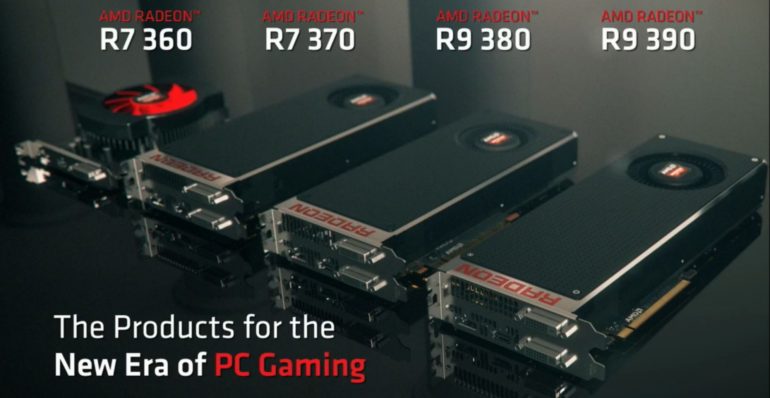 The new cards target the mid-range to performance GPU market and offer various levels of performance. The Radeon R7 360 is the slowest of all of them – the card features 768 stream processors, 48 TMUs, 16 ROPs and a 128-bit memory bus that serves 2 GB of GDDR5 memory. The GPU, codenamed Bonaire, runs at 1050 MHz and the memory at 6.5 GHz effective, providing 104 GB/sec of memory bandwidth. The card has a power rating of 100W and draws energy from a single 6-pin power connector.

The Radeon R7 370 is designed for games at 1080p resolution and offers 1024 stream processors, 64 TMUs, 32 ROPs and a 256-bit memory bus that serves 2 GB or 4 GB of GDDR5 memory. The GPU runs at 975 MHz, while the memory operates at 5.4 GHz effective clock speed, which translates into 179 GB/sec of memory bandwidth. The card features a typical board power of just 110W thanks to some energy consumption optimizations and draws power from a single 6-pin power connector.

The Radeon R9 390 sits one step higher than the R9 380. This card has enough power to play games at 1440p resolution and even at 4K resolution with moderate settings. It comes with 2560 stream processors, 160 TMUs, 64 ROPs and a 512-bit memory bus that serves 8 GB of GDDR5 memory. The GPU runs at 1000 MHz, while the memory operates at 6 GHz, which means the GPU enjoys the staggering 384 GB/sec of memory bandwidth. The Radeon R9 390 has a typical board power of 275W and draws power from a combination of 6-pin and 8-pin PCIe power connectors.

Finally we have the Radeon R9 390X, which is the fastest of the five and has enough power to play games at 4K resolution with eye candy. The card offers 2816 stream processors, 172 TMUs, 64 ROPs and a 512-bit GDDR5 memory bus that serves 8 GB of memory. The core here is clocked at 1050 MHz and the memory at 6 GHz, which results in 384 GB/sec of memory bandwidth.

All cards in the line feature some new AMD technologies including VSR and FRTC. VSR stands for virtual super resolution and this feature is similar to NVIDIA’s dynamic super resolution (DSR). The technology allows gamers to render their games at higher resolutions than what their displays are capable of and resize the output with advanced re-sampling so the output at your lower resolution monitor looks better than if the game were to render at the monitor’s native resolution. FRTC is an abbreviation for frame-rate targeting control, which is a frame rate limiter that works inside the Radeon driver and changes the GPU and memory clock speeds on the go to maintain a custom-set frame rate. So if you want to have your game rendered at 50 FPS, FRTC will lower the clock speeds of the GPU and the memory to achieve this frame rate speed, while saving energy and lowering fan noise at the same time.