AMD gives cash back to purchasers of company chips

AMD FX chips are known for being slower than Intel’s offerings of the same class and while AMD’s APUs are doing pretty well the US-based chip company still wants to improve the popularity of its products via a new cash-back scheme for customers buying select AMD FX processors and APU chips.

The cash-back campaign is available in select European countries and in order to take advantage of it customers will have to purchase one of the qualifying products – A-series APUs or AMD FX processors with four, six or eight cores from a participating reseller. The campaign will run between June 11, 2012 and August 31, 2012 and having purchased an APU or a CPU the customer will have to fill out an online form and upload a proof of purchase before the closing date of September 18, 2012. The customer will then get some cash back via BASC or cheque within 45 days. 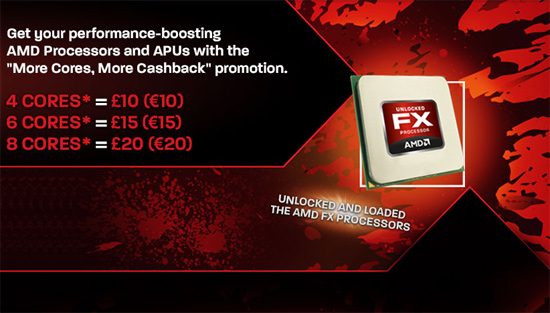 The offer is valid in the UK and in Austria, Finland, France, Germany, Greece, Italy, the Netherlands, Norway, Portugal and Sweden. AMD has yet to confirm plans to offer a similar sales incentive elsewhere.