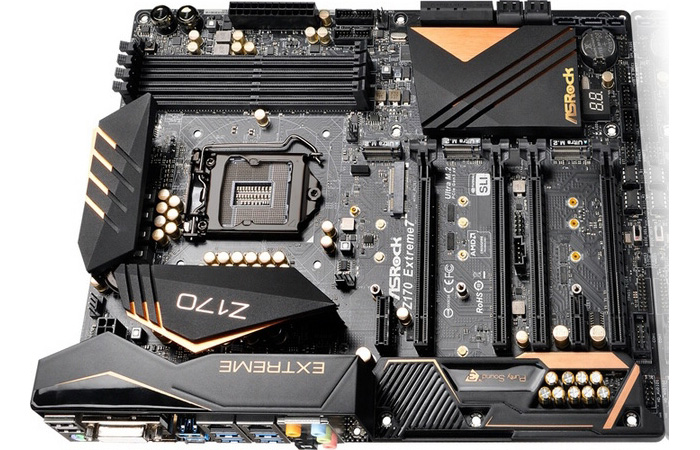 ASRock has followed suit with other motherboard makers and has presented its first flagship LGA 1151 motherboard called Z170 Extreme7.

As the name of the board suggests here we have an Intel Z170-based motherboard with an Intel LGA 1151 socket. The Z170 Extreme7 works with all upcoming Skylake 14 nm processors and features a black-orange PCB that includes a 24-pin ATX power connector, one 8-pin EPS connector, four memory slots for up to 64 GB of DDR4-3200 memory, three PCI-E 3.0 x16 slots that work in x16/-/- or x8/x8/- or x8/x4/x4 modes and one PCI-E x16 slot (electrical x4). The board specs continue with ten SATA 3.0 ports, three M.2 and SATA Express 16 Gbit/sec ports, a mPCIe port, two USB 3.1 ports (Type-A and Type-C), eight USB 3.0 ports and Realtek ALC1150 sound, that includes the Purity Sound III technology. In the back the Z170 Extreme7 has DVI, DisplayPort 1.2 and HDMI 2.0 ports. The board also has dual BIOS in case something goes wrong.

The price and the availability date of the Z170 Extreme7 are unknown as of now.