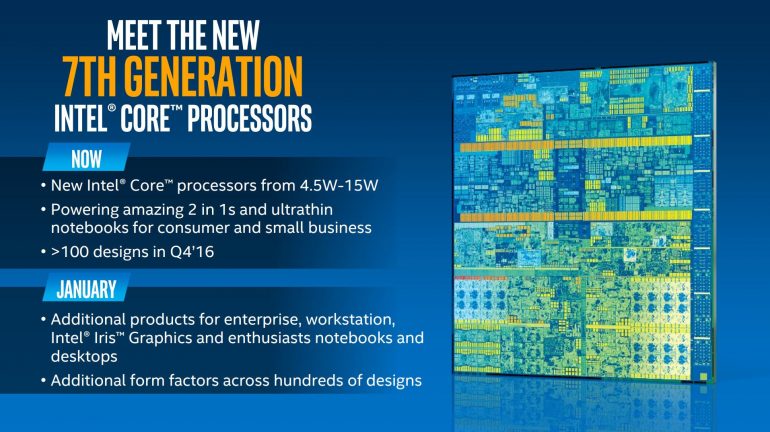 Intel has officially announced its third 14 nm processor family – the widely rumored and expected Kaby Lake chips. This is not a launch, however – instead the new chips have been only described.

Intel says that the Kaby Lake generation will come with a greatly improved integrated GPU that can easily work with 4K content, providing eight times the 4K performance of a 5-year old PC. The GPU can also play modern 3D games in HD resolution with no problems. The chips also feature a new HEVC 10-bit decode capability that delivers smooth premium content playback up to 4K resolution. Kaby Lake comes with an improved and more energy-efficient micro architecture, an advanced process technology and silicon optimizations for better performance compared to previous generation processors. Mobile Kaby Lake chips provide the best ever energy efficiency and processor and platform level so notebooks utilizing these chips will be able to work longer.

Early tests of the Core i7-7700K Kaby Lake processor suggest that the new microarchitecture delivers about 3-5 per cent better performance per clock cycle – a trend that has been around for a few years now. Under the Sandra 2015 Processor Arithmetic test the i7-7700K achieved 151.94 GOPS, while the Core i7-6700K Skylake processor managed to get 140.88 GOPS. It is also worth noting that the i7-7700K worked at 4.2 GHz with Turbo at 4.5 GHz, while the Skylake chip ran at its nominal 4 GHz clock speed, reaching 4.2 GHz in Turbo mode.

The Kaby Lake generation will be on the market in late 2016. The chips will use the LGA1151 socket so in most cases a new motherboard will not be needed.