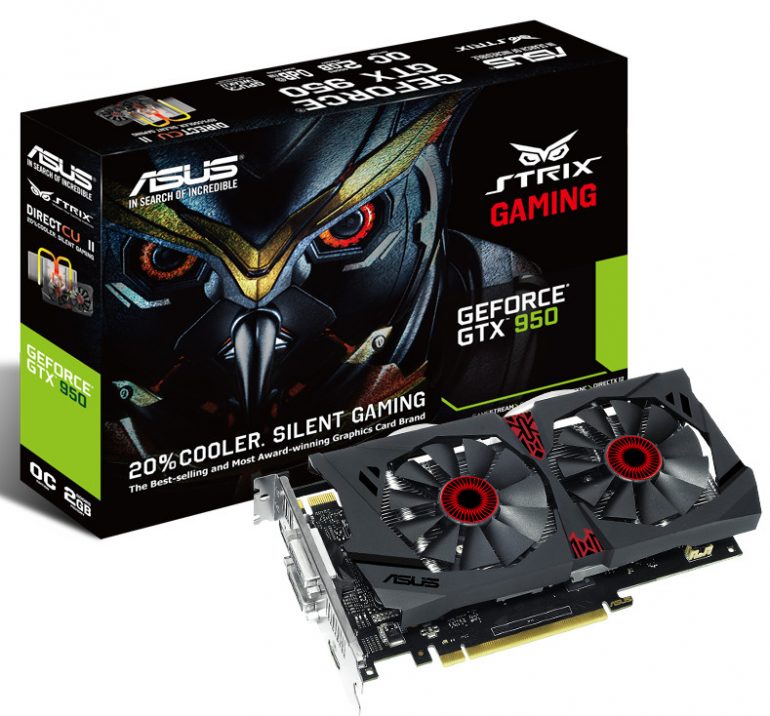 Yesterday NVIDIA launched the GeForce GTX 950 video card, which was brought to life with two purposes in mind – to retire the GTX 750 and GTX 750 Ti offerings of a year ago and to bring enough performance for the more and more popular MOBA games around us. Not surprisingly then, the GTX 950 was offered instantly by numerous video card makers including Zotac, Gigabyte, Palit, EVGA and others.

The competition will be stiff and that’s why ASUS has launched a counter attack with the all-new GeForce GTX 950 STRIX OC video card. The novelty comes with various interesting technologies and a factory-overclocked chip that pushes performance levels even further. The GeForce GTX 950 STRIX OC GPU runs at 1329 MHz and goes up to 1355 MHz in overclocking mode, delivering up to 11.5 per cent better performance than reference cards in games such as The Witcher 3. The card also has ASUS Auto-Extreme technology with Super Alloy Power II components for premium quality and reliability. The technology includes the industry’s first 100 per cent automated manufacturing process that removes human fallibility from the production line for consistent perfection, which makes the new ASUS video card extremely reliable. This new manufacturing process is also environmentally friendly, eliminating harsh chemicals and reducing power consumption by 50%.

The new ASUS GeForce GTX 950 STRIX OC video card is available now. There’s no information on how much it costs, though.