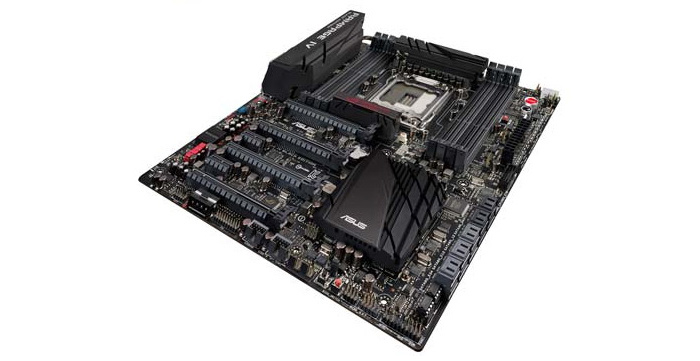 The Republic of Gamers line of high-end hardware products by ASUS will soon be complemented by a new ultra high end motherboard known as ASUS ROG Rampage IV Black Edition X79. As the name suggests the motherboard is based on the Intel X79 chipset and supports LGA 2011-based processors.

Targeting enthusiasts and overclockers the ASUS ROG Rampage IV Black Edition X79 comes with an extensive number of features and hardware goodies. Offering support for all Intel LGA 2011 processors such as Sandy Bridge-E and Ivy Bridge-E the motherboard comes with an Extreme Engine Digi + III power supply scheme, eight slots for DDR3 memory (up to 64 GB), four PCI-E x16 slots with support for 4-way SLI and CrossFireX, two PCI-E x1 slots, 12 SATA ports with eight of them being SATA 3.0 and four SATA2.

As expected the motherboard also comes with support for USB 3.0 devices, Gigabit Ethernet, 802.11ac Wi-Fi, 7.1-channeled audio with SupremeFX Formula technology, VGA Hotwire and Subzero Sense technologies, UEFI BIOS and a ton of other nice features that guarantee you excellent overclocking results and fun when playing with your hardware.

The ASUS ROG Rampage IV Black Edition X79 will be on the market on November 18. Its pricing is still unknown but there’s no way for the motherboard to be cheap so stuff your wallets with cash before you purchase it.