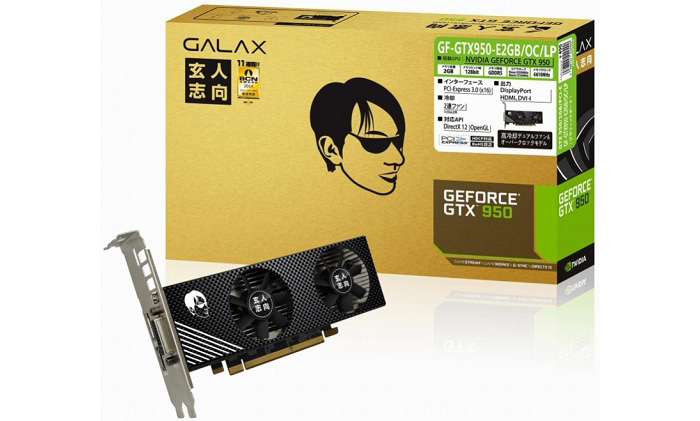 The evolution of NVIDIA’s budget GeForce GTX 950 video card has reached a new milestone, despite the age of the technology that sits behind the GTX 950. The company Galaxy Microsystems, which produces video cards under the Galax brand, has developed, along with the Japanese company Kuroutoshikou, the first low-profile GTX 950 video card.

The new card is known as Galax GF-GTX950-E2GB/OC/LP and takes two slots. The card is 50 mm wide and 183 mm long and includes two 50 mm cooling fans that produce up to 28.5 dB of noise. The card features low power consumption and gets power just from the PCI-E x16 slot it is installed in. The rest of the specs do not surprise – the low profile Galax GTX 950 card comes with the well-known GM206 GPU, features 768 stream processors, 48 texture units and 32 ROPs and has 2 GB of GDDR5 memory with a 128-bit memory bus. The GPU runs at 1038 MHz and reaches 1216 MHz in Turbo mode, while the GDDR5 memory operates at the fixed frequency of 6610 MHz. Finally in the back the card has one DVI port, one HDMI connector and one DisplayPort connector.

The Galax GF-GTX950-E2GB/OC/LP will sell for around USD 173. The price is valid for Japan only.