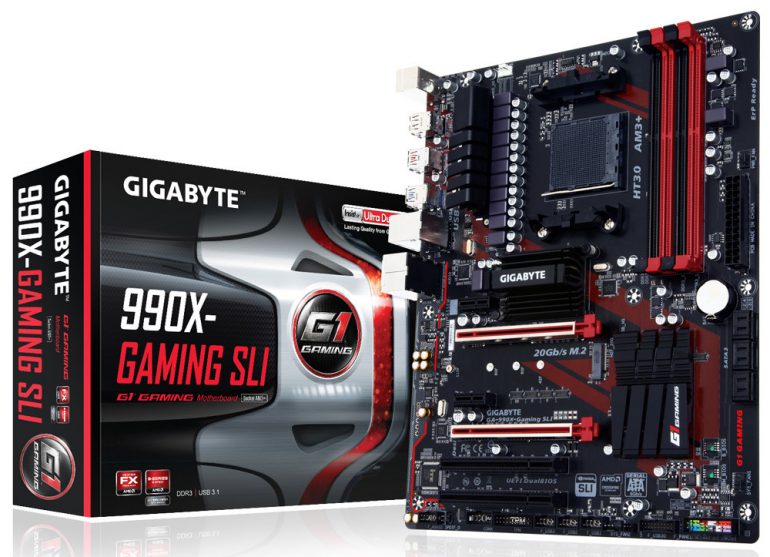 The recent trend of having a new generation of AMD AM3+ motherboards has continued – the Taiwanese motherboard maker Gigabyte has announced the new 990X-Gaming SLI motherboard, which happens to be the third Gigabyte G1.Gaming series motherboard.

As the name of the board suggests, the 990X-Gaming SLI is based on the AMD 990X chipset and features support for NVIDIA’s SLI technology. The main feature of the new mainboard is that it has support for AMD’s 220W TDP FX processors – the FX-9590 and FX-9370. Apart from this the new Gigabyte product features the common ATX form factor, draws power from a combination of 24-pin and 8-pin EPS power connectors and filters the power for the CPU via a 11-phase VRM system.

The new motherboard has four memory slots for up to 32 GB of dual-channeled DDR3-2400 memory. There are two PCI-E 2.0 x16 slots (x8/x8 when both are populated), two single PCI-E 2.0 x1 slots and two legacy PCI slots. The 990X-Gaming SLI has six SATA 3.0 ports, a 20 Gb/sec M.2 slot, two USB 3.1 ports (with both of them being Type-A) and four USB 3.0 ports (two on the rear panel and two by the headers). An Intel I-218V Gigabit Ethernet chip will meet all your networking needs. Finally the board has UEFI BIOS and a 10-channeled on-board audio solution.