The Taiwanese manufacturer of motherboards and video cards has followed MSI and ZOTAC in their steps and as a result has announced its latest GeForce GTX 560 video card bearing the name of Gigabyte GV-N560448-13I and featuring 448 cores.

The new piece of computer hardware comes with a Windforce 3X cooler which features three 80 mm fans and an evaporation chamber underneath them. This cooling system has been also used in other company devices. 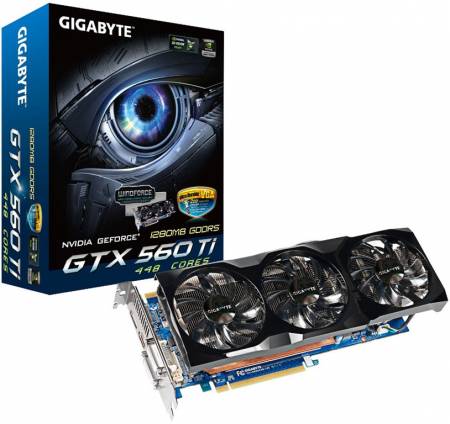 In addition Gigabyte now offers customers its Ultra Durable technology that has come to video cards as well. The new video card comes with twice the copper for power and ground layers, solid state capacitors and ferrite cores for the chokes.

Expected price is around 300 USD. The new video card will be sold in limited quantities in the USA, Canada, Great Britain, France, Germany, Russia and the Scandinavian countries.