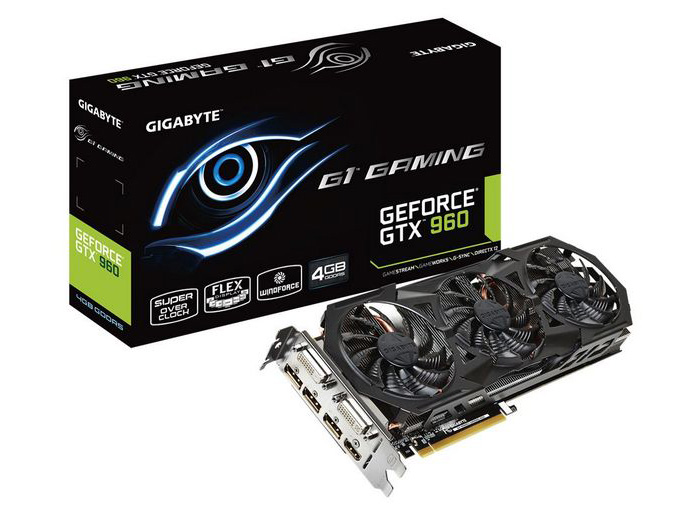 The craze to release GeForce GTX 960 graphics cards with 4 GB of video memory has caught up with Gigabyte, which has already released two new models of the GTX 960 line that have 4 GB of GDDR5 memory on-board. The cards carry the GV-N960WF2OC-4GD and GV-N960G1 GAMING-4GD brand names.

The two cards have almost nothing in common. On the outside the first model comes with WindForce 2X cooling which may not be needed that often since when running at low clock speeds the card will be able to power off the cooling fans. The first model also has two DVI ports, three DisplayPort ports and one HDMI. The card runs at 1216 MHz for the GPU (1279 MHz Turbo) and when overclocked the card can run at 1241 MHz for the GPU (1304 MHz Turbo). The memory of the card always works at 7010 MHz.

The second model boasts a more massive WindForce 3X cooler with three cooling fans. When the GPU is cold then the cooling fans power down and go back to normal speed when things become hotter. The card runs at 1241/1304 MHz in normal mode and at 1266/1329 MHz when overclocked.