Despite the hard drive crisis the computer industry is in, the Japanese company Hitachi has launched the world’s most spacious desktop hard drive – now with 4 TB capacity.

The new drive carries the DeskStar 5K moniker and comes in 3.5-inch format with support for SATA 3 interface and rotational speed of 5900 rpm. Built-in cache is 32 MB, the same found in earlier 2 and 3 TB drives. In fact the 4 TB monster strongly resembles its older “brothers” – Hitachi has just added a new platter inside thus increasing overall capacity.

Availability is still unknown as the hard drive surfaced in a rather unusual way – it was found in stores without any official documented Hitachi release. This perhaps is due to the fact that the 4 TB drive was made in flood-stricken Thailand and amidst the floods and production difficulties it seems Hitachi has played it safe by not making big headlines when in fact availability could be quite variable. 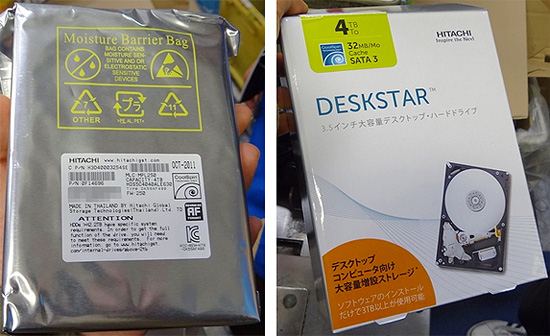 Pricing is 345 USD which is not cheap but at the same time is not too much given the current hard drive crisis.

Still, there’s hope for computer geeks and tech gurus as there’s a new technology in the works which will allow capacities of up to 30 TB in the upcoming years.