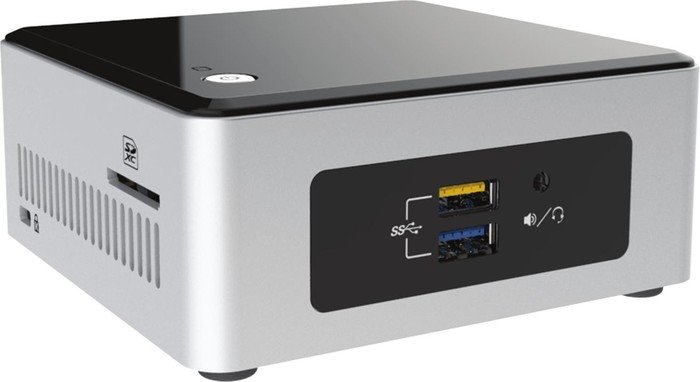 Intel has expanded its Next Unit of Computing (NUC) initiative with the addition of the new NUC5PGYH nettop computer that has enough power for every day computing tasks.

The new device measures 115 x 111 x 51.6 mm and includes an Intel Braswell Pentium N3700 processor with four cores that operate at 1.6 GHz (up to 2.4 GHz in Turbo mode). The chip also offers an Intel HD Graphics GPU that runs at 400 MHz (700 MHz in Turbo mode). The Pentium processor inside comes with TDP of just 6 watts and that’s why it is cooled by an aluminum heat sink only making the NUC5PGYH a really quiet computer.

The new Intel nettop computer has 2 GB of DDR3L memory that can be expanded to 8 GB, 32 GB of internal flash memory, enough space for a 2.5-inch hard drive if the flash memory inside is not enough, a SDXC card reader, Gigabit Ethernet, 802.11ac Wi-Fi and Bluetooth 4.0. The computer has various connectivity options as well – it comes with four USB 3.0 ports (two of which are located up front), HDMI and D-Sub ports and 3.5-mm audio jacks.

The NUC5PGYH may seem like a less powerful computer but it has enough muscle to run the new Windows 10 operating system, which it comes with. The machine sells for USD 249.