The troubled computer manufacturer Lenovo is trying to gain back consumer confidence with the launch of a new ThinkStation E31 workstation. Remember the long story cut short – the company was forced to recall a massive number of its ThinkCentre M70z and M90z AIOs due to a problem in the power supply unit.

Anyway Lenovo now has the ThinkStation E31 workstation, which thankfully is not an all-in-one PC. Instead the new model is available as two distinct machines, which is the most unusual thing about the entire product. The first one is a budget machine available as a conveniently sized tower, while the other one is a compact computer. As you may already expect the difference (except for the size) lies in the expandability. 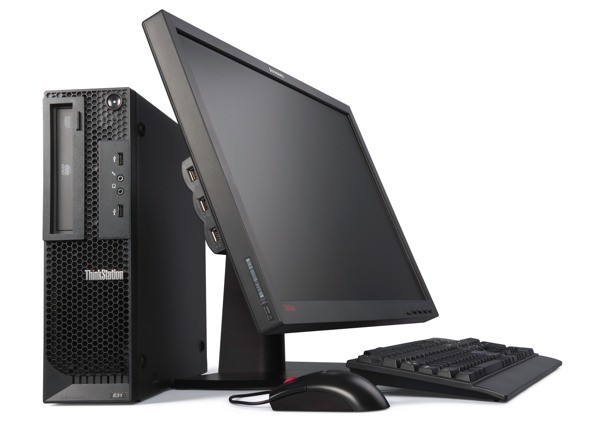 But both machines also share quite a bit – the two of them can boast up to 32 GB of RAM and are available with either an Intel Xeon E3-1200 CPU or a range of Intel Ivy Bridge processors. Regardless of the size, you’ll get nine USB ports, including four of the 3.0 variety. And, in addition to Windows 7 / XP, they’re Windows 8-ready, and can run Red Hat as well.

The bigger model however boasts better upgradeability than the smaller one as it can house up to three hard drives while the smaller one only has room for two. On the graphics front, both will be offered with Intel’s HD 4000 solution, but the upgrade options once again differ – expect a max offering of NVIDIA Quadro Q4000 graphics on the tower, and Quadro Q600 on the smaller guy.

The full size tower will be officially on the market starting on June 5 while the compact model will be available on June 13. As to the price – both systems will start at 629 USD.