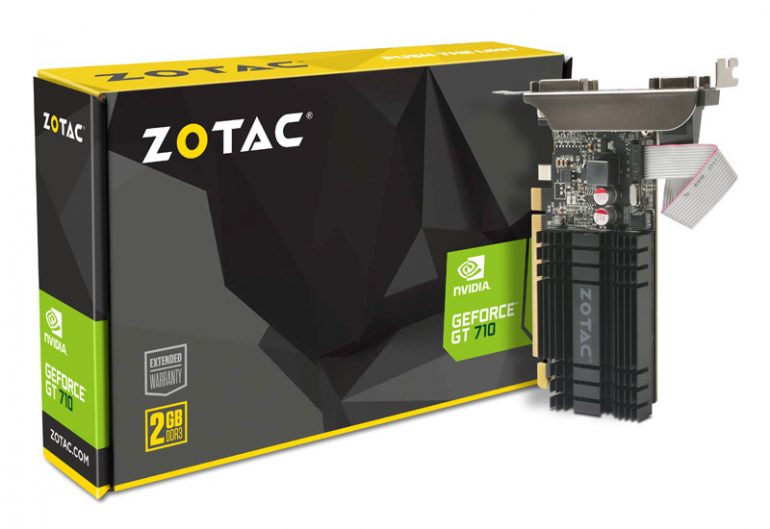 Quite unexpectedly GPU giant NVIDIA has launched one more graphics card. Called GeForce GT 710, the new card has not arrived to set any world records – judging by the name this is a budget-oriented card but NVIDIA says it has more punch than expected, which is just right for people who need a cheap video card to occasionally play old games or enjoy high quality videos.

The new GeForce GT 710 is more powerful than initially anticipated – NVIDIA claims the new video solution is up to 10 times faster than most integrated solutions and in addition to this is 70 per cent faster than the previous generation card in the same price range. Speaking of this the GeForce GT 710 will sell for around EUR 40 or even less so this is nice. Performance-wise the GT 710 is based on the now older Kepler GPU architecture and features 192 CUDA cores that run at 954 MHz. A standard version of the GT 710 is equipped with 2 GB of GDDR3 memory with a 1 GB option possible as well. The memory is connected to the GPU via a 64-bit memory interface and thus it provides 14.4 GB/sec of memory bandwidth.

In addition to this the new GeForce GT 710 offers support for many technologies – the card can work with PureVideo, PhysX, FXAA and others and has support for resolutions of up to 2560 x 1600 pixels or 3840 x 2160 at 30 Hz or even 4096 x 2160 at 24 Hz. The card also includes DVI-D, HDMI and VGA connectors as well as support for DirectX 12 (feature level 11). Thanks to the low power consumption of just 19 watts the GT 710 comes with a passive cooler but still the reference card requires space for two slots inside your PC case (certain models require only one). The card measures just under 6 inches long and 2.7 inches high.