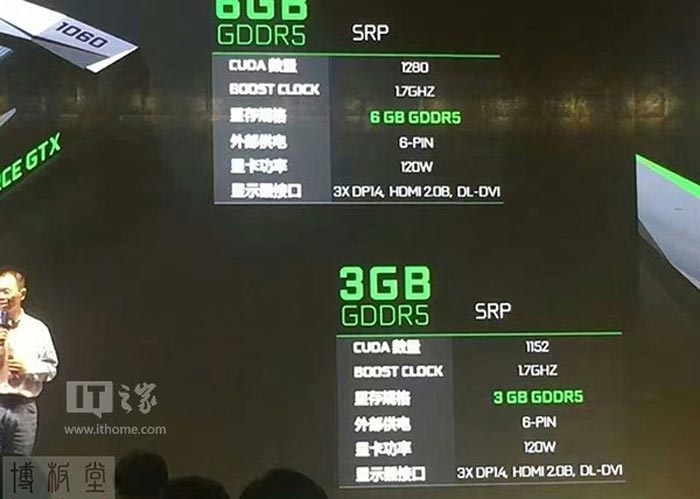 Although the desktop GeForce GTX 1060 video card has been out for a few weeks now this video card remains a mystery – there are rumors of a 3 GB version that may feature fewer CUDA cores than the one with 6 GB of VRAM. Then again some sources say that the 3 GB of memory will be the only difference…

Well, at an even held in China NVIDIA has unofficially described its GeForce GTX 1060 video card with 3 GB of GDDR5 memory. Unfortunately for gamers on a budget the new video card will come with fewer CUDA cores as initially expected – while the 6 GB version of this video card has 1280 CUDA cores, the 3 GB model will have 1152 stream processors. The TMU number is also reduced from 80 to 72. The memory bus will stay the same at 192 bits, while the GPU will be able to reach 1700 MHz in Turbo mode. According to NVIDIA the 3 GB GTX 1060 will need 120W of power and will require a 6-pin power connector. It will also get HDMI, DL-DVI and DisplayPort 1.4 connectors at the back.

The GTX 1060 3 GB will directly compete with the AMD Radeon RX 480 video card and will sell for USD 199. The card will be on the market next month.