NZXT, the US manufacturer of custom and gaming computer cases has released the successor of the highly successful NZXT Phantom case – the Phantom 410.

The new case seems very similar to its older “brother” due to the fact that it shares the same stylish and modern looks but at a much smaller overall size. This makes the case suitable for an ATX motherboard. A nice addition is a windowed side panel.

NZXT became famous with its Phantom Big-Tower, which offered a daring new look – noticeably different than anything else on the market. With the unique design and a long list of features, the Pantheon Big-Tower quickly became one of the most popular cases for those looking for a stylish and modern chassis. Now the US company offers the same – but at a smaller overall size. 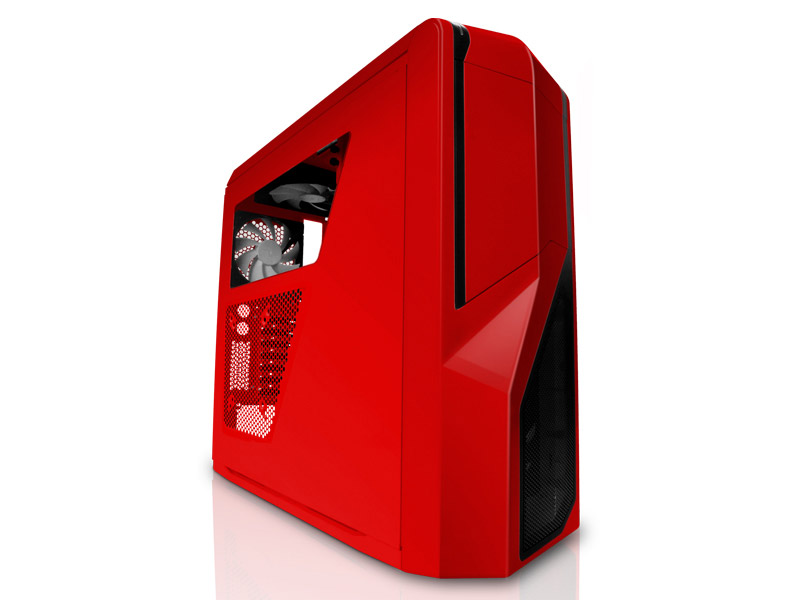 The Phantom 410 is designed for ATX, mATX and Mini-ITX motherboards. The case is 21.5 cm wide, 52 cm high and 53.2 cm deep. This makes it full 9 cm shorter than the bigger Phantom.

With such dimensions the new Phantom 410 comes with three 5.25 inch slots. In comparison the Phantom offers 5 such bays. Also present are six screw-less internal 3.5 inch bays, with the ability to install 2.5 inch SSDs in each.

Each drive has its own separate tray which is to be pulled out from the motherboard side of the chassis, with the connectors facing away of the windowed side as well for a clean interior look. The upper hard drive cage consists of four bays and can be pulled out, allowing for graphic cards of up to 40 cm length to be installed. With this bay inside the chassis, there is still enough space for units with up to 30.5 cm.

The Phantom 410 also allows the installation of a 120 mm fan on the side of the hard drive cage in the interior of the chassis. This improves drastically the air flow not only for the installed storage devices but also provides ample cool air for the motherboard and the graphics card. The fan can also be adjusted pointing at the hottest points in the case. In addition to the three pre-installed fans, the Phantom 410 may take additional five fans that may be placed within the case to maximize air flow if need arises.

Fan speeds can be adjusted with a simple but very effective fan controller on top of the chassis. Up to four cooling units may be connected to this device, allowing the user to set the performance level easily.

The Phantom 410 also comes with two USB 3.0 ports with an internal 20-pin header along with USB 2.0 and audio I/O. Enthusiasts also have the option to install water cooling as the Phantom 410 chassis offers space for a 240 or 280 mm radiator in the ceiling. Total weight of the new case is 9 kg.  Even with its compact size, the Phantom 410 still offers an impressive list of features – much like its bigger brother.

The new Phantom 410 will become available on December 9 for 99.90 EUR exclusively at www.caseking.de. It will be available in white, black and red.