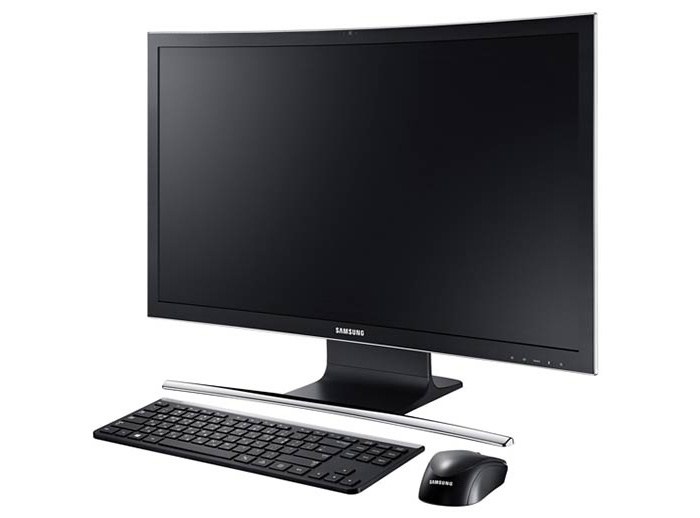 Curved monitors slowly but surely take market share from regular displays so it is a matter of time before you get one. Starting next month, however, you will be able to jump ahead of everybody and get a curved monitor that sits on top of an all-in-one (AIO) PC. Thanks to the efforts of Samsung in one week time this will become reality.

The Korean company plans to introduce what happens to be the world’s first AIO PC with a curved display at CES 2015 next week. The machine will be known as All-in-one PC 7 and will measure 638.8 x 383 x 39.6 mm. It will have a large 27-inch display at Full HD resolution, an Intel Haswell Core i5 processor, integrated Intel HD graphics, 8 GB of LPDDR3 memory, a 1 TB hard drive, one 128 GB SSD, a Full HD web camera, 10-watt speakers, Bluetooth, Wi-Fi and a HDMI port. The computer will run Windows 8.1 and will support the Bluetooth Music Player technology that allows you to stream music from one device to another by using Bluetooth technology. The price of the Samsung All-in-one PC 7 is unknown as of now but the package will include a keyboard and a mouse so you will not have to buy new ones.

Next to the All-in-one PC 7 users will be able to get the all new Samsung Notebook 9 2015 Edition, which happens to be a laptop that is 11.8 mm thick and 950 grams in weight. The main features of the new notebook are portability and the ability to work for up to 12 hours on battery power. The notebook also comes with a premium chassis that features a single metal alloy unibody design. On the inside the Samsung Notebook 9 2015 Edition has an Intel Core M 5Y10c processor at up to 2 GHz and Intel HD 5300 graphics, a 12.2-inch IPS Hyper Real Display screen at 2560 x 1600 pixels, 8 GB of RAM, a 256 GB SSD and Windows 8.1.

Finally Samsung has dropped the ATIV brand name that it used for all its Windows-based products previously; starting now the company will use just the series name along with the Samsung logo. In addition since Samsung does not sell notebooks on the European market anymore the new Samsung Notebook 9 2015 Edition might not be available on the Old Continent.