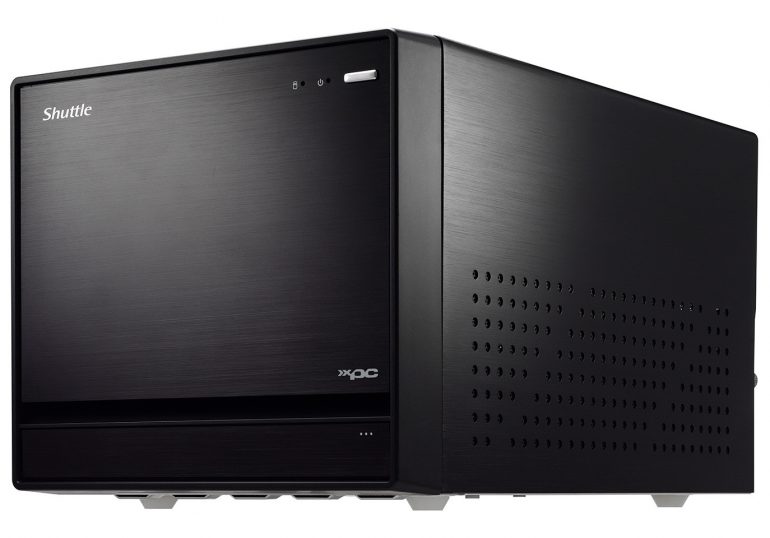 Shuttle has announced the new SZ170R8 mini PC, which comes with an unusual feature – unlike other mini computers, which have enough room for up to two hard drives and a single optical drive, the SZ170R8 has enough space for four 3.5-inch drives. The price to pay is that the new mini PC by Shuttle does not come with an optical drive.

The new PC also boasts more free space inside its chassis, which eases hardware installation and provides all prerequisites for efficient active cooling. Thanks to this the Shuttle SZ170R8 is compatible with a number of large graphics cards so the 3D power you need is guaranteed. The hardware inside is cooled by a heatpipe-based cooling system, which has been expanded to include a second fan, fitted to the front of the case. The smart cooling system sucks cool air inside through a large opening up front and then takes this fresh air over all four hard drives, thus preventing heat build-up. The sides of the machine also feature significantly larger vents, which helps cool the video card installed inside.

Inside the SZ170R8 features a custom-made Shuttle motherboard, which is compatible with all Intel Skylake processors with TDP of 95 watts. Despite the fact that the board comes with the Intel Z170 chipset, the 95W TDP requirement will limit overclocking. The motherboard has a single PCI-E 3.0 x16 slot for video cards, one PCI-E 3.0 x4 slot, one M.2-2280 slot and another Mini-PCI-Express 2.0 x1 slot for expansion devices. In addition to this the custom motherboard has four DDR4 memory slots for up to 64 GB of RAM memory, four SATA 3.0 ports with support for RAID, eSATA, HDMI, DisplayPort, eight USB 3.0 ports, a 7.1-channeled audio chip and Intel Gigabit Ethernet. All the hardware inside gets powered by a 500W, 80-Plus-certified power supply unit. But this is not everything – the Shuttle SZ170R8 has several optional accessories, which include a 2.5-inch HDD/SSD installation frame, a COM port as well as WLN-C and WLN-M WLAN modules. Despite all the changes and the supported powerful hardware the dimensions of the SZ170R8 have not changed compared to other Shuttle mini PCs – the computer measures just 33.2 x 21.6 x 19.8 cm (L x W x H).

Shuttle wants EUR 322, excluding VAT, for this small-sized but powerful computer. The SZ170R8 is available now.