The leader manufacturer of LCD display solutions, Samsung Electronics America, announced today two new lines of monitors, that function both as a monitors and high definition television sets. These multi-function monitors, the 30 and 90 display series, are ranging from 21.5 to 24 inches, offering the ability to switch easily from work to play with enhanced quality of the picture.

“People are looking to do more in smaller areas and multi-function monitors are a great way to maximize the functionality of a single device,” said Young Bae, director of display marketing Samsung Enterprise Business Division. “Samsung continues to expand our multi-function offerings and these two new lines – the 30 and 90 series – provide a new range of options and value for our customers.”

Both of the 30 and 90 series of monitors by Samsung can function as a small high definition television set with Picture in Picture, and obviously, a monitor. Users can use their computer to watch TV without the need of a second monitor or additional wiring and connections. 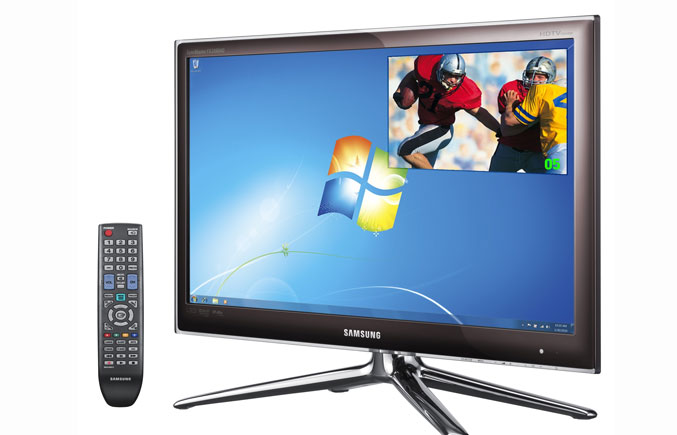 The 30 and 90 series of multi-function monitors feature two HDMI inputs for easy connection to multiple devices like video game consoles, players and etc. The Samsung Connectshare feature allows the user to listen to music or view movies and photos from a memory stick or a portable player, and even a digital camera through a USB connection.

The 30 and 90 series of monitors by Samsung are also equipped with MagicAngle by Samsung, in order to ensure that users will see full brightness and color range while watching the monitor from angles. The 90 series of monitors feature an elegant and sleek design, market by a Touch of Color Mystic Brown finish accented with a quadruple stand which is coated by chrome. The 30 series of monitors are available in 21.5, 23 and 24 inch screen sizes, and are finished in a sleek black combined with a clear acrylic bar on the bottom bezel.