Samsung Electronics Co., Ltd. announced today that it has begun mass producing 256 gigabyte (GB) solid state drives for use in notebooks and desktop PCs. With the addition of the high-speed 256GB drive, Samsung now offers the most extensive line of SSDs in the industry with 8, 16, and 32GB SSDs for low-density designs and 64, 128 and 256GB alternatives for the higher densities.

The new 256GB SSD more than doubles the performance rates of Samsung 64GB and 128GB SSDs to become the SSD with the highest overall performance in the personal computer industry, combining sequential read rates of 220MB/s (megabytes per second) with sequential write rates of 200MB/s. This sharply narrows the performance gap between read and write operations to only 10 percent, compared to a read-write speed difference of between 20 and 70 percent for other SSDs. In addition, erase cycles are a rapid 100GBs per minute, allowing the entire drive to be re-written much faster, when needed.

”While SSD’s have always been touted for their performance, Samsung is turning the storage industry upside down now with an SSD that delivers truly disruptive performance,” said Jim Elliott, vice president, memory marketing, Samsung Semiconductor, Inc. ”Getting our exceptionally high performing 256GB SSD in a notebook is analogous to having a 15,000rpm drive, without all of its size, noise, power and heating drawbacks.” 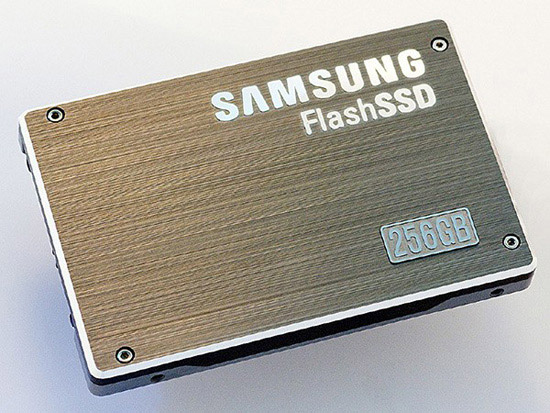 The 256GB SSD’s advanced performance can be attributed to a new, optimized, single platform design consisting of a chip controller, NAND flash and special drive firmware all developed by Samsung. This single platform is designed to easily adapt to Samsung’s 40nm class NAND flash memory.

Also offering a high degree of energy efficiency, the new drive consumes 1.1 watts of power versus two or more watts for a comparable HDD, while delivering outstanding reliability and durability. The high operating speed of the 256GB SSD translates into longer periods in either stand-by or idle mode resulting in up to 40 minutes of extended operation on a single battery charge.