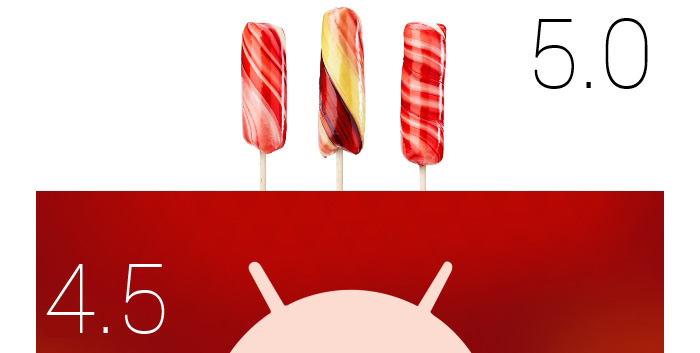 After many months of rumors and expectations and just a day after the debut of the powerful Nexus 6 smartphone Google has launched the Android L operating system that is now known as Android 5.0 Lollipop.

The new version of the popular mobile OS comes with a large number of changes with the visual being the first to be spotted. Android 5.0 Lollipop comes with the so-called “Material Design” style that Google talked about at I/O 2014. Material design is a mix of colorful flat interfaces with shadows that give them depth and hierarchy and all this makes apps more intuitive to use. The notification system of Android has undergone changes as well – now you can see your notifications directly on the lock screen and even reply to them.

Android 5.0 Lollipop increases security as well because Lollipop devices will be encrypted out of the box, which reduces the chance of having your mobile device stolen and makes sure thieves will not have access to it. You can now also secure your device by pairing it with a Bluetooth-enabled wearable such as an Android Wear smartwatch or even your car. This feature is called Android Smart Lock.

The new Android improves battery life thanks to a new runtime called ART that allows apps to natively compile on the device, which both increases performance and reduces power consumption at the same time. The Android 5.0 Lollipop also comes with “Project Volta”, which is a battery saver mode that can extend use by 90 minutes and a new Job Scheduler API that when used by app developers, can reduce the power consumption of those apps. Users can now also see how much time they have left before they need to charge their Android device again.

The rest of the great new features of Android 5.0 Lollipop continue with device sharing that finally allows people to have multiple accounts on the same device, a quick setting for the flashlight and there are now cast screen, screen rotation and hotspot controls as well. Thanks to the new Android Runtime, Google says Android 5.0 Lollipop brings up to 4x performance improvements, more compact background applications and a smoother UI for complex apps. The audio latency in Android has been greatly improved as well and now you can record sound in real time. Lollipop also brings support for USB audio and now you can connect amplifiers and mixers to your Android device as well. The new Android version also comes with support for the latest OpenGL ES 3.1 graphics API and includes Google’s own Android Extension Pack that adds a few extra features. The camera API has been overhauled as well and it now is fast enough to be able to take advantage of the full resolution of the sensor at 30 FPS burst mode.

ASUS to include external power card in ROG line

It is easy to see that Android 5.0 Lollipop is the best Android version so far and it does solve numerous issues that have plagued people for a long time. The new OS comes with a much more modern design language, great performance improvements, a bunch of new features and 5000 new APIs that developers can start using right away. These are the reasons why Android 5.0 Lollipop will become the most popular Android version in the near future.