The company HDI Dune has introduced a new line of hybrid media players which along with the functionality to play all of your audio and video formats, also combine and functionality of a set-top-box for  IPTV, Internet TV and Video on Demand (VoD) services.

The new Dune HD TV family of universal HD media players now includes two models, TV-101 and TV-301, but company is planing to extends the line with new models in the future.The series have support of a large number of Audio and Video formats and codecs, as well as support of free Internet services including YouTube, YouTube Movies,  and variety of Internet Radios. Other features included possibility of reception of digital terrestrial TV programs using an embedded or optional USB module, the support for interactive TV, and the capability of SIP telephone, including support for video calls when the player owner has a web-cam. 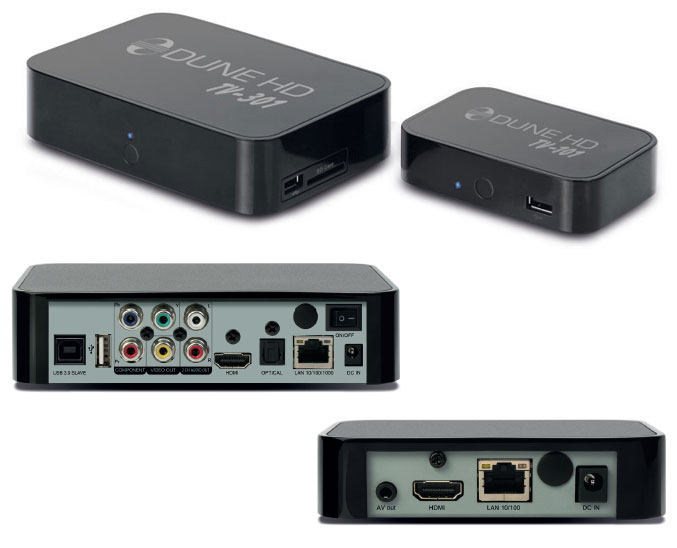 The players are equipped with Sigma Designs 8670 media processors, RAM: 256 MB, 128 MB Flash memory, expandable with a HDD partition, USB flash drive, or SD card. The base model TV-101 offers all you need from a media player in a ultra-compact size, while the TV-301 model, also offers a 2.5-inch hard drive bay with SATA interface, Ethernet, a card reader, an additional USB port for connecting external storage devices, and USB 3.0 Slave interface for fast transfer between PC and player’s HDD. The TV-301 model is available in two variants, with embedded DVB-T/C or DVB-T/T2/C tuner for watching the digital terrestrial and cable TV.