The Finnish mobile devices manufacturer has unveiled a new phone that can work with two SIM cards.

The phone uses the S40 user interface and also allows its owner to easily manage costs and move “easily between as many as five SIM cards using a dedicated SIM manager.” In addition the X2-02 comes with “a special audio processing feature that brings you the clearest sound you’ll find at this price”, an in-built loudspeaker, dedicated music keys, and a “Play via Radio” feature song recordings directly from the FM radio. 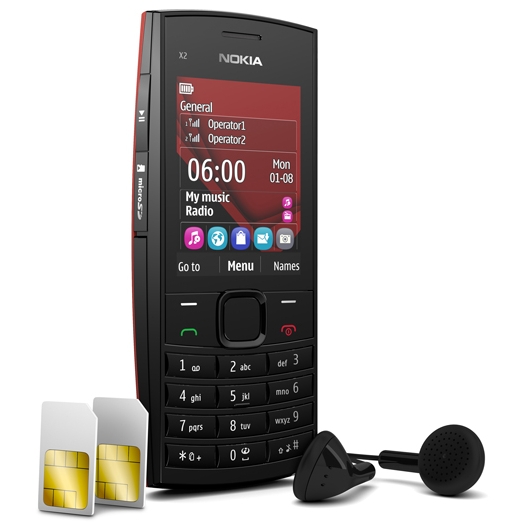 Other specs include a 2.2-inch QVGA display, Nokia browser, Facebook and Twitter clients, a 2-megapixel camera, support for microSD cards with capacities up to 32 GB and a battery that according to Nokia should provide the user with a talk time of up to 9.7 hours, or a stand-by time of up to 18.5 days. Unfortunately the phone does not have 3G connectivity.

The phone will be released in five color versions: Bright Red, Orange, Violet, Ocean Blue, and Dark Silver. It is not known as of now when the new phone will be launched or where. Expected price is around 60 EUR which suggests that the phone targets developing economies.