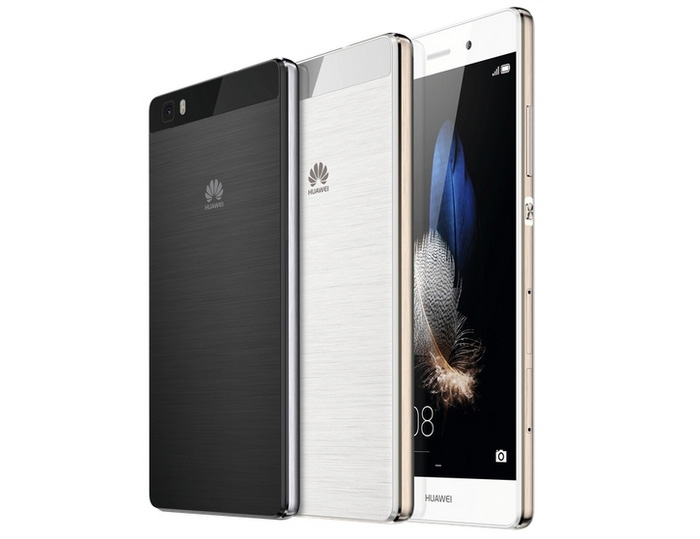 At an event in London, the UK, Huawei has presented two new smartphones – the flagship Ascend P8 and its larger P8 max version.

We’ll start with the P8, which happens to be the most powerful phone of the three. The Ascend P8 retires the current P7 flagship and comes housed in a metallic chassis that is just 6.4 mm thick. The handset has two versions with 16 GB of internal memory or 64 GB of internal memory and sports a 5.2-inch LCD JDI IPS-Neo display at Full HD resolution, a 64-bit Hisilicon Kirin 935 processor with eight Cortex-A53 cores at 2.0 GHz, 3 GB of RAM, a rear 13 MP camera and an 8 MP front one and there are Wi-Fi, Bluetooth 4.1, NFC, a GPS receiver, a microSD card slot for expansion, a microUSB 2.0 slot and a 2680 mAh battery. The smartphone measures 144.9 x 72.1 x 6.4 mm and weighs 144 grams. The Ascend P8 runs Android 5.0 Lollipop along with Emotion UI 3.1 on top of the OS.

Along with these two smartphones Huawei has unofficially presented the Ascend P8 Lite, which happens to be a budget-oriented version of the regular P8. This means that the P8 Lite comes with less powerful hardware and indeed it does – the device has a 5-inch sensor display at 1280 x 720 pixels, an 8-core Hisilicon Kirin 620 processor, 2 GB of RAM, 16 GB of internal memory, two cameras – one rear at 13 MP and another front at 5 MP and a 2200 mAh battery. All this is housed in a cheaper plastic chassis too. The phone measures 143 x 70.6 x 7.7 mm and weighs 131 grams. It also runs Android 5.0 with Emotion UI on top of it.