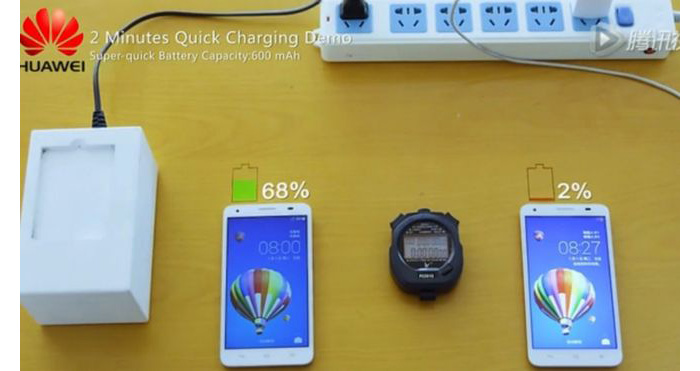 In the past few years each one of us has gotten many new mobile devices such as tablets, notebooks, smartphones and even smartwatches. The common thing among all these gizmos is that they get powered by batteries and this is perhaps the biggest drawback – you have to constantly check the battery level and if needed to recharge the device. Consider the hassle you have to go through if you have five or more of these devices. Things are not nice, are they?

Well, there’s hope on the horizon – just like most other tech gadgets batteries have been making steady progress. While we still haven’t reached the point of being able to recharge a smartphone battery in one minute we are now one step closer to this being a reality thanks to the efforts of unnamed Huawei engineers who have created a new quick charge battery that will ease the lives of many people around the world.

The main feature of the new battery is that it can be recharged from zero to 48 per cent in just five minutes. The secret to this is in the details – the new lithium-ion battery has a special graphite-coated anode that can withstand the stress of very fast charges. The battery is still in its prototype stage but it can hold 3000 mAh of energy, which will perfectly suit most modern smartphones. Huawei has also created a smaller battery with 600 mAh under the hood that can be charged from zero to 68 per cent in just two minutes.

Unfortunately there’s no information how much extra time is needed for both these batteries to reach 100 per cent but we hope it is not hours, which will diminish the overall achievement of Huawei. Still, it is convenient to have a battery that can get a lot of energy in a few minutes – that way you are covered when you do not have enough time to wait for your smartphone to get fully charged. Unfortunately we will have to wait for some more time before we ever get this new battery in a new generation smartphone – currently the battery is still in Huawei’s labs and requires a bulky set-up so clearly more time is needed for things to become more refined.